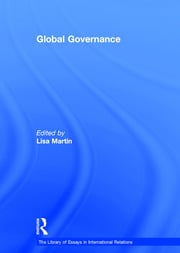 As economic, social and environmental connections among states have grown stronger and denser in the last decades, new levels and types of governance have emerged. The process of globalization, while not entirely new, has created new challenges for policymakers attempting to reap its benefits and manage its effects. This volume pulls together work on global governance that examines these challenges and looks at the patterns of governance that emerge. The work is organized into six sections. The first introduces concepts crucial to the analysis of global governance, including representation, efficiency, and hierarchy. The next two sections turn to specific patterns of governance in two realms, security and economic affairs respectively. The fourth section examines legal dimensions of governance. The fifth section concentrates on the impact of global governance on domestic politics, while the sixth looks at how concepts of norms and legitimacy structure our understanding of governance. Overall, this collection reveals a rich scholarly understanding of globalization, governance, and institutions that builds on deep theoretical roots while shedding light on major policy issues.