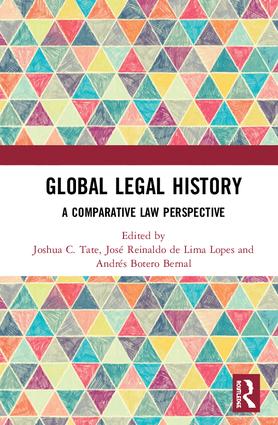 This collection brings together a group of international legal historians to further scholarship in different areas of comparative and regional legal history. Authors are drawn from Europe, Asia, and the Americas to produce new insights into the relationship between law and society across time and space. The book is divided into three parts: legal history and legal culture across borders, constitutional experiences in global perspective, and the history of judicial experiences. The three themes, and the chapters corresponding to each, provide a balance between public law and private law topics, and reflect a variety of methodologies, both empirical and theoretical. The volume highlights the gains that may be made by comparing the development of law in different countries and different time periods.

The book will be of interest to an international readership in Legal History, Comparative Law, Law and Society, and History.

2 Legal Development from a Comparative Perspective: English contract law in the nineteenth century

3 Legal history and comparative perspective: a study of the Cuban experience

4 Bar associations and the circulation of legal knowledge: Argentina and Brazil, 1917-1943

6 The Revolutionary Constitution of 1917 in Mexico: From Individual Guarantees to Social Rights, 1917–1928

7 Presidential Impeachments in Brazil: Lessons from the Past and Challenges for the Future

8 Exclusion and Inclusion of the French Law on Neighboring Plots of Land in the Civil Codes of Francophone Switzerland, Louisiana, and Quebec: Reflections on the Relation between Law and Society

10 Justice in the Ibero-American World in the Enlightenment Era

Joshua C. Tate is Professor of Law at Southern Methodist University, Dedman School of Law (Dallas, Texas, USA). He has been a visiting faculty member at the University of Pennsylvania Law School (Spring 2008), a Lloyd M. Robbins Senior Research Fellow at the University of California at Berkeley (Fall 2012), and a visiting scholar at the University of Alaska Fairbanks (Summer 2018). His research and teaching focus on legal history, property, and trusts and estates. From 2013 to 2015, he gave a series of more than sixty lectures in North and South America, Africa, Asia, and Europe in commemoration of the 800th anniversary of Magna Carta. He is currently engaged in a study of the development of property rights and remedies in medieval England, focusing on the issues of jurisdictional conflict with regard to rights of presentation to churches.

is Professor of Law at the Law School of the Universidade de São Paulo, Brazil, where he teaches jurisprudence, legal theory, and legal history. His publications include a history of Brazilian legal culture (Naturalismo jurídico no pensamento brasileiro [Legal naturalism in Brazilian legal thought], São Paulo, Saraiva, 2014) and of the Brazilian Council of State in the XIXth century (O Oráculo de Delfos [The Oracle of Delphi], São Paulo, Saraiva, 2010). He also contributed to the Oxford International Encyclopedia of Legal History, with the entries on Brazil and Portuguese colonial law. He has been a visiting professor at several universities abroad, including Bogotá, Colombia (2001); Munich, Germany (2002); Toulouse, France (2016); and Bordeaux, France (2018). He was also awarded the prize of best legal book of the year in 2006 by the Câmara Brasileira do Livro.

is Professor of Philosophy at the Philosophy School of the Universidad Industrial de Santander (Bucaramanga, Colombia), where he teaches and researches legal philosophy and legal history. His latest books are about the history and the basis of the oath given by witnesses in a judicial process and the history of legal positivism, with both texts to be published by the Universidad Industrial de Santander.