Global Perspectives in Urban Law
The Legal Power of Cities 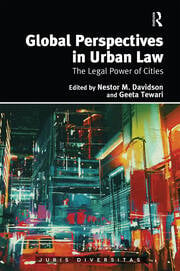 Global Perspectives in Urban Law: The Legal Power of Cities

The growing field of urban law demands a collaborative scholarly focus on comparative and global perspectives. This volume offers diverse insights into urban law, with emerging theories and analyses of topics ranging from criminal reform and urban housing, to social and economic inequality and financial crises, and democratization and freedom for individual identity and space. Particularly now, social, economic, and cultural issues must be closely examined in conjunction with the rule of law not only to address inadequate access to basic services, but also to construct long-term plans for our cities and our world—a bright, safe future.

Introduction;  Part I: Law and belonging in the urban context;  1. Contested values: how Jim Crow segregation ordinances redefined property rights;  2. Privacy, participation and the city;  3. Discrepancy between legal approaches and policy goals: a case study of subsidized housing in Hong Kong;  4. Eviction as a tool for crime control: fighting drug-related crime in the Netherlands and the United States;  5. Urban citizens and water: Johannesburg and Dublin’s experience with the human right to water;  6. Who owns the sidewalk? Analysing spatial reorganization amidst regulation and hierarchies in the Pondy Bazaar Street Market, Chennai, India;  7. ‘Better city, better life’? Urban transformation and conflict management in the global south;  Part II: Innovation and urban governance in legal perspective;  8. Financing local governments in times of recession: financial and legal innovation in the face of the 2008 crisis;  9. Keeping municipal law making democratic: a critical appraisal of the legal position of third party rights from the state of Victoria, Australia;  10. Saving sriracha, fighting city power: an LA school view of urban law in a hot sauce conflict;  11. Cities as stakeholders: corporate social responsibility in an urban environment

Nestor M. Davidson is the Albert A. Walsh Chair Professor of Real Estate, Land Use and Property Law at Fordham Law School and the Faculty Director of the Urban Law Center. Professor Davidson has published widely in the fields of property theory, urban law, and affordable housing law and policy. He earned his AB from Harvard College and his JD from Columbia Law School. Professor Davidson previously practiced with the firm of Latham & Watkins and served as Special Counsel and Principal Deputy General Counsel at the U.S. Department of Housing and Urban Development.

serves as Associate Director of the Urban Law Center at Fordham Law School. She earned her BA in Government from Cornell University and her JD from Fordham Law School. She has practiced public interest law for the New York City Law Department and the Washington D.C. Office of the Attorney General. Tewari also holds a Master of Fine Arts in Fiction Writing from Columbia University, where she taught creative and expository writing to New York City high school students and the Columbia undergraduate and alumni community. Information about her writing is available at www.geetatewari.com.

'This volume persuasively demonstrates that the global and the local increasingly overlap. In case studies ranging from the United States to Hong Kong, the Netherlands to India, and Ireland to South Africa and Australia, an internationally diverse collection of legal scholars and social scientists show that such problems as housing, crime control, water supply, management of public space, social conflict, and popular engagement in governance characterize cities around the world, even as differences in local economics, culture, politics, history and law lead to varying solutions. The reader comes away impressed with both the wide range and complexity of urban responsibilities, and the many creative ways in which they can be addressed.'

'This book is further evidence that urban law, as a discipline, has arrived. The book’s diverse contributions reflect the various ways that law shapes how we live in cities, how we interact with each other in city spaces, what kind of resources are made available to different kinds of urban residents, and who gets to participate in the variety of decisions that make a city what it is. The contributions powerfully demonstrate that while urban law is intensely local a comparative analysis between cities and regions can yield trenchant insights into the power of law in addressing many of the challenges ushered in by this era of global urbanization.'