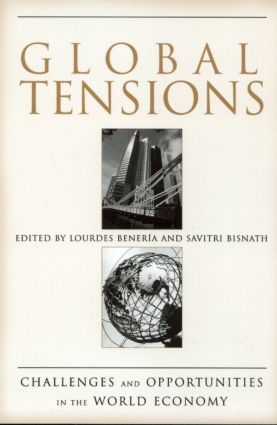 Challenges and Opportunities in the World Economy, 1st Edition

Against the backdrop of demonstrations in Seattle, Porto Alegre and Genoa and within the context of growing resistances to free trade and the current global trends, Global Tensions takes a close look at the challenges posed by the processes of globalization at the beginning of the twenty-first century. Composed of original essays by renowned scholars, this volume explores controversial topics such as free trade, women's rights, labor standards, the World Trade Organization and global tensions.

"The range of this volume matches the sweep of globalization; its rigorous analysis provides solid backing from a group of respected professionals for the growing ranks of critics of the neoliberal corporate agenda. An excellent read for anyone following the transformations under way in the global political economy." -- Gita Sen, Sir Ratan Tata Chair Professor, Indian Institute of Management

"Beneria and Bisnath have assembled an impressive group of scholars whose work spans the worlds of academia and public policy. Transcending complaint, these wonderfully perceptive and substantial essays probe the tensions engendered by globalization. Collectively, they debunk the myth of globalization as historical will and reveal its material consequences for people and places." -- Robert Beauregard, Professor of Management and Urban Policy, New School University

"This collection of essays reflects some of the most innovative and original thinking on the contradictions of the current globalization process. The volume will be a very valuable resource for researchers and those teaching courses on globalization in many disciplines, and especially for those interested in interdisciplinary analyses. Among the many books written on the subject from a critical point of view, this one is a gem." -- Nilufer Cagatay, Associate Professor of Economics, University of Utah

"This is a wide-ranging, timely and important collection with many first-class contributors. It is particulary refreshing to read a dialogue between feminists, political theorists and critical public policy scholars on a broad range of problems, tensions and dynamics. A must-read for those interested in the challenges of contemporary globalization." -- Isabella Bakker, Professor and Chair, Department of Political Science, York University

Lourdes Beneria is Professor of City and Regional Planning and Women's Studies at Cornell University. She lives in Ithaca, New York, and is the author of the forthcoming Routledge title Gender, Development and Globalization: Economics as if People Mattered (2003).

Savitri Bisnath received her PhD from Cornell University and currently works for an international philanthropic organization.