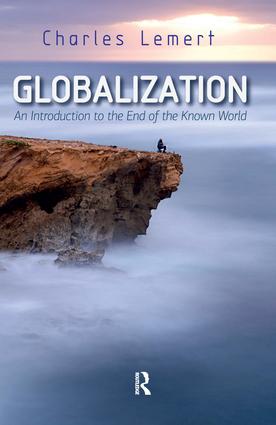 An Introduction to the End of the Known World, 1st Edition

"Globalization: An Introduction to the End of the Known World" surveys the history of globalization from the earliest of ancient texts through contemporary debates and the prospects for anticipating the new worlds to come. At the end of the twentieth century, debates over the nature of globalization were unable to agree on a simple resolution, except to say that globalization is economic, political, and cultural all at once. Cultural globalization affects everyone with a smartphone, on which global youth from Los Angeles to Jakarta listen to Jay-Z and Beyonce. States are torn in several directions at once by unsettling economic, political, and cultural forces. Lemert concludes with a serious outline of the possible ways of imagining what the still-unknown global world will become next ways including optimism, caution, and skepticism."

"Lemert is inviting us to wonder along with him how globalization came to be as it is, and that is a key to the art of teaching. A special and compelling work.”

“With his usual combination of style and wit, Charles Lemert delights students and teachers of social theory once again. Distilling and assessing the most important aspects of the globalization debates while also pushing forth new conceptual ground in an unexpected engagement with actor-network theory and world-systems analysis, Globalization is a must for teachers from all disciplines who are looking for a rigorous intellectual statement on what may be the defining condition of our times.”

“A book of highest importance. Putting sociology and history into a reflective analysis, Charles Lemert helps us to see globalization anew. The book is full of quiet wisdom from a global expert, enlivened by personal examples. Just when it seemed that everything that could be said about globalization had been said, Lemert intervenes to make us think again!”