Globalization and Transnational Capitalism in Asia and Oceania 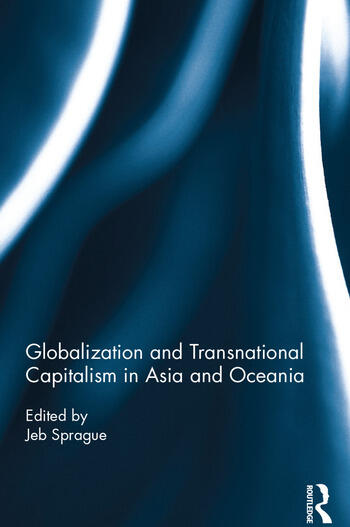 Globalization and Transnational Capitalism in Asia and Oceania

News headlines warn of rivalries and competing nations across Asia and the Pacific, even as powerful new cross-border relations form as never before. This book looks behind the Asia-Pacific curtain: at the new forms of social, economic, and political integration taking place through a global capitalism that is rife with contradictions, inequality, and crisis. We are moved beyond traditional conceptualizations of the inter-state system with its nation-state competition as the core organizing principle of world capitalism and the principal institutional framework that shapes the makeup of global social forces.

These important studies examine and debate over how there is a growing transnationality of material (economic) relations in the global era, as well as an emerging transnationality of many social and class relations. How does transnational capitalist class fractions, new middle strata, and labor undergird globalization in Asia and Oceania? How have states and institutions become entwined with such processes? This book provides insight into a field of dynamic change.

Jeb Sprague is in the Department of Sociology at the University of California at Santa Barbara and is a founding member of the Network for Critical Studies of Global Capitalism. View his academic website at:  https://sites.google.com/site/jebsprague/.

'While as an edited volume there is much variation from chapter to chapter, most of the eighteen contributors to Globalization and Transnational Capitalism in Asia and Oceania are influenced by the global capitalism school, which posits that the contemporary processes of production, labor struggles, and class and ideology formation cannot be adequately grasped from an epistemological framework that affords primacy to the nation-state as its unit of analysis. In the words of editor Jeb Sprague, this book pays close attention to transnational processes, underlining the contradictions that emerge as these unfold in Asia and Oceania, a region that has been relatively less explored through this critical lens than areas such as North America, Latin America and Europe...' — Journal of World-Systems Research, Volume 22, Issue 2

'The book is theoretically underpinned by the global capitalism school and its analytical focus on transnational class and social relations in a world transitioned from its previous international phase of world capitalism to the current global phase of world capitalism, where national economic structures are integrated into global structures of economic activity dominated by particular sets of economic/political/technocratic/consumerist elites… [A]n extremely valuable addition to the literature. It casts its net wide but retains a consistent worldview which is compelling and thought-provoking. The authors are right to assert that, to a significant extent, we now live in a qualitatively different world; the forms of ‘hyper-capitalism’ we see today have caused a dispersal in authority away from nation states and mean that continuing to ignore the types of actors and networks of power explored in this volume would be nothing short of naive. With patterns of wealth accumulation continuing in the direction of a relative few, the issues raised by this book are extremely timely, and will likely only become a matter of increasing salience for the Asia Pacific and Oceania in the future.' — Journal of the Asia Pacific Economy, Volume 21, Issue 4

'Jeb Sprague’s edited volume, Globalization and Transnational Capitalism in Asia and Oceania (New York: Routledge, 2016), fills a crucial gap in this burgeoning literature and is a much-desired contribution to the case for the rise of a Transnational Capitalist Class in the region. […] This book should be valuable to anyone interested in how globalisation has impacted Asia and Oceania across a range of themes and perspectives. Moreover, it is essential reading for anyone interested in the GCS as its first book-length treatment of this region of the world that must be tested by every theory of globalisation.' — Journal of Contemporary Asia, Volume 47, Issue 2

'Different chapters in the book deal with issues ranging from tax havens in small Pacific states to mining in PNG, schooling in India, uneven development in Laos, the transformation of China's working class, and the state, capital and class struggle in Australia. What gives the collection of conference papers some degree of coherence is the common concern to explore how these specific concerns relate to broader patterns of globalising capitalism. The introduction to the book by the US editor Jeb Sprague and the chapters by leading transnational class scholars Jerry Harris and William Robinson are particularly helpful in this regard. There is also a concluding chapter that seeks to draw the threads together by asking what are the prospects for using political economic analysis to make a practical difference.' — Journal of Australian Political Economy, No. 79, p. 152

'In 1998, Kenichi Ohmae wrote from his business management perspective, ‘This is why we [cor-porations] must globalize’. From that point onward, the term ‘borderless world’ – from his book of the same name in 1990 – gained traction, at least in many business schools all over the world. Almost 20 years later Globalization and Transnational Capitalism in Asia and Oceania, edited by Jeb Sprague, debates Ohmae’s principle thesis, without actually ever mentioning Ohmae or the term ‘borderless world’. The core of the debate asks whether national borders really matter to global capitalism, as we see fundamentally new transnational processes coming about, processes this volume empirically demonstrates. […] There is much to admire about this collection. While not intended as such, I found that the way in which these papers were organized, and based on the issues discussed, this volume is probably the de-facto textbook on the global capitalism school. It does not imply that every chapter neces-sarily agrees with the global capitalism model; there were a few which argue that the model cannot explain certain processes in specific locations at a given time in history. Yet, the chapters engage and challenge, which is useful to someone who is not fully convinced of the model. Lastly, it was a relief that all the chapters were short and concise. Only the main points were discussed, with the clear strategy being to offer a comprehensive reference list if the reader should so decide to learn more about a particular case in point.' — Critical Sociology, Volume 43, Issue 4-5