Globalization and the Indian Economy
Roadmap to a Convertible Rupee 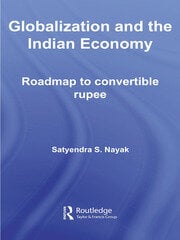 Globalization and the Indian Economy: Roadmap to a Convertible Rupee

This book examines the impact of globalization on the Indian economy, exploring the trade, investment and financial aspects of globalization, and also considering its implications for the balance of payments and currency exchange rate.

The first part of the book deals with the evolution of the philosophy of globalization and its impact on exchange rates, global liquidity, currency markets, and global trade and payments. It highlights the catalytic role played by the US in driving the globalization process, and provides detailed analysis of the evolution of the international monetary system to illustrate current processes of globalization. Furthermore, a critical discussion of the Asian financial crisis of 1997 is presented as well as the lessons that have emerged from the crisis.

The Indian economic experience and its own policy of dealing with globalization is the focus of second part of the book. The author examines the genesis of economic reforms and liberalization in India. The success of the Indian policy of gradualism is discussed in the context of the Asian crisis, and the reasons as to why India averted a similar crisis are explored. Finally, the author examines whether the Indian currency, the rupee, can be made fully convertible.

Satyendra S. Nayak is an independent advisor and consultant. His experience stems from 27 years of working in Commercial Banking and Mutual Fund at the Bank of Baroda and Unit Trust in India, as well as years of experience in operation, international finance, project financing, foreign exchange operations, mutual fund management, equity and debt investments and portfolio management. He received his PhD in International Economics and Finance from the University of Bombay, India. He teaches at ICFAI Business School in Mumbai in the Centre for Advanced Banking and Finance Studies.

"Dr. Nayak undertook the gargantuan task of describing his country's development in the broad context of globalization. From his long-time seat at the center of Indian investing, he has a unique perspective.  He persuasively argues that the caution of India's Reserve Bank paid off in avoiding the blunt effect of the Asian crisis by not following the then popular recipe book and holding off on Rupee convertibility until its capital account was less vulnerable.  With the recent growth of India's reserves to unprecedented levels, he now believes that the reward for past caution should be the use of some of these reserves on critical infrastructure needs."

Past board member of the India Growth Fund

Author of The Emerging Markets Century and Emerging Securities Markets

"Satyendra Nayak’s book provides an outstanding analysis of the evolution of the  international monetary system and a penetrating evaluation of India's financialperformance and economic prospects in the rapidly globalizing world of today. A must reading for anyone interested in these important topics."

Distinguished Professor of Economics and Director of the Ph.D. Program

"Satyendra Nayak’s impressive analysis of India’s step-by-step approach to
capital-account liberalization is important reading for anyone interested in
the essentials of financial globalization. He skillfully contrasts the
pragmatic Indian approach to the gung-ho financial capitalism that produced
the Asian financial crisis of 1997, and offers recommendations for the future."

"India's economy, long a slumbering giant, has benefited greatly from a successful policy of gradualism in reform, which has averted crises while promoting increasingly rapid growth. Full convertibility, Dr. Nayak contends, would be the last mile on the road of economic liberalization. This book should be of interest to anyone interested in the future of a country that is destined to be a major force in the world economy of the twenty-first century."