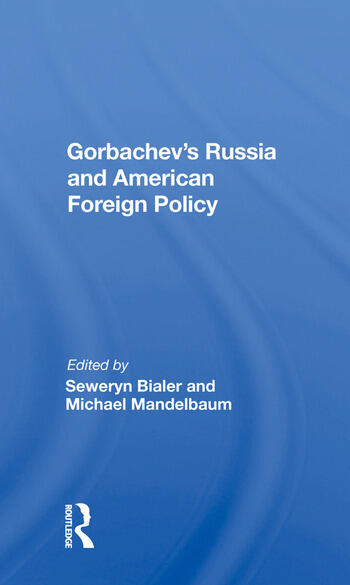 This book examines in depth the question of the changing Soviet Union and U.S. foreign policy. It serves as evidence to the scholarship and expertise the East-West Forum is applying to the issues that are implicit in and emanate from the changing superpower relations.

Introduction Part One: Patterns of Change 1. The Changing Nature of Change in the USSR 2. Sources of Change in Soviet History: State, Society, and the Entrepreneurial Tradition Part Two: Russia After Stalin 3. The Soviet Economic Model 4. War, Weapons, and Soviet Foreign Policy 5. Human Rights: A Thaw Imperiled Part Three: Gorbachev's Russia 6. Gorbachev and the Politics of System Renewal 7. The Crisis of the Soviet System of Power and Mikhail Gorbachev's Political Strategy 8. Gorbachev's Program of Change: Sources, Significance, Prospects Part Four: Russia and the West 9. The Evolution of U.S. Policy Goals Toward the USSR in the Postwar Era 10. Western Influence on the Soviet Union Part Five: Gorbachev and the United States 11. Gorbachev's Russia and U.S. Options 12. U.S. Policy and Gorbachev's Russia 13. East-West Relations 14. The Soviet Union and the West: Security and Foreign Policy