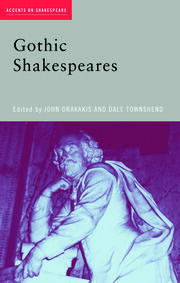 Readings of Shakespeare were both influenced by and influential in the rise of Gothic forms in literature and culture from the late eighteenth century onwards. Shakespeare’s plays are full of ghosts, suspense, fear-inducing moments and cultural anxieties which many writers in the Gothic mode have since emulated, adapted and appropriated.

The contributors to this volume consider:

In Gothic Shakespeares, Shakespeare is considered alongside major Gothic texts and writers – from Horace Walpole, Ann Radcliffe, Matthew Lewis and Mary Shelley, up to and including contemporary Gothic fiction and horror film. This volume offers a highly original and truly provocative account of Gothic reformulations of Shakespeare, and Shakespeare’s significance to the Gothic.

John Drakakis is Professor in the Department of English, University of Stirling. He has published articles, chapters and books on a wide variety of literature, drama, critical theory and cultural studies. He is also the series editor for Routledge's 'New Critical Idiom series'.

Dale Townshend is Lecturer in Gothic and Romantic Literature in the Department of English, University of Stirling. He has published many articles and co-edited several books on the Gothic.

'...[T]he book will most certainly be of use to Shakespearean and eighteenth-century scholars and is well worth the read. Gothic Shakespeares is a pioneering foray into a vast landscape of topics; hopefully further discussions will ensue.' - Peter Paolucci, York University