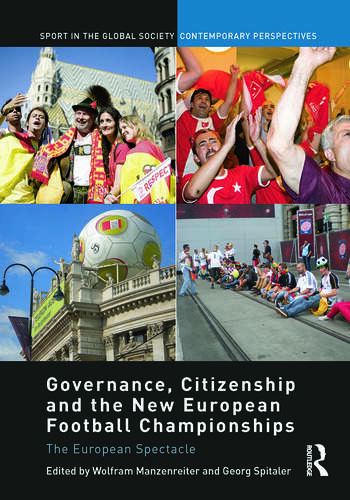 Over the past decade, European football has seen tremendous changes impacting upon its international framework as well as local traditions and national institutions. Processes of Europeanization in the fields of economy and politics provided the background for transformations of the production and consumption of football on a transnational scale. In the course of such rearrangements, football tournaments like the UEFA Championship or the European Champions League turned into mega-events and media spectacles attracting ever-growing audiences. The experience of participating in these events offers some of the very few occasions for the display and embodiment of identities within a European context.

This volume takes the 2008 EUROs hosted by Austria and Switzerland as a case study to analyze the political and cultural significance of the tournament from a multidisciplinary angle. What are the special features and spatial arrangements of a UEFAesque Europe, in comparison to alternative possibilities of a Europe? Situating the sport tournament between interpretations of collective European ritual and European spectacle, the key research question will ask what kind of Europe was represented in the cultural, political and economic manifestations of the 2008 EUROs.

This book was published as a special issue of Soccer and Society.

1. Introduction: governance, citizenship and the new European Football Championships: the European spectacle  2. Towards a Europeanization of football? Historical phases in the evolution of the UEFA European Football Championship  3. From the stadium to the fan zone: host cities in a state of emergency  4. Governing by fun: EURO 2008 and the appealing power of fan zones  5. Football negotiating the placement of Switzerland within Europe  6. The Europeanization of Austrian football: history, adaptation and transnational dynamics  7. Left off the stage: mapping inclusion and exclusion in EURO 2008  8. Europe divided, or Europe united? German and British press coverage of the 2008 European Championship  9. (En-)gendering the European football family: the changing discourse on women and gender at EURO 2008  10. Discourses on forced prostitution, trafficking in women, and football: a comparison of anti-trafficking campaigns during the World Cup 2006 and the European Championship 2008  11. EUROSCHOOLS 2008: the difficult relationship of culture, nation and anti-racism in UEFA’s campaign work  12. The EURO 2008 bonanza: mega-events, economic pretensions and the sports–media business alliance  13. Material and representational legacies of sports mega-events: the case of the UEFA EURO™ football championships from 1996 to 2008  14. The European stage for next-generation stars and fans: the Under-17 Championship 2009 in Germany  15. After the crunch: a new era for the beautiful game in Europe?

Wolfram Manzenreiter is associated with the Department of East Asian Studies, University of Vienna, where he teaches modern Japanese society. His research is mostly concerned with issues of sports, popular culture, media, and labour in a globalizing world.

Georg Spitaler has widely published on sports, popular culture and the politics of nationalism. The independent researcher is a part-time lecturer at the Department of Political Science, University of Vienna, as well as editorial board member of Austria’s leading football magazine, Ballesterer.