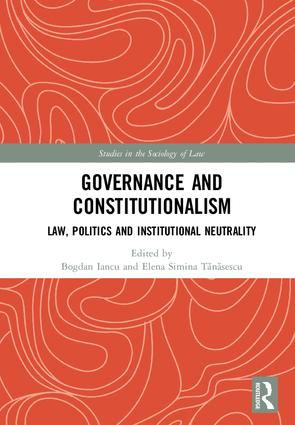 This collection studies the rise of neutral bodies as a challenge to the constitutional paradigm of the nation state. Administrative entities such as commissions, agencies, councils, authorities or ‘independent agencies’ as they are sometimes known, are relatively autonomous from majoritarian democratic control and by their institutional design fall outside the classical triad of powers or branches of government. They may even fall outside the confines of the nation state itself as with the EU Commission.

The book is divided into theoretical-historical and empirical parts. Part I approaches the phenomenon through the rigorous normative conceptual lens of constitutionalism and constitutional law, questioning the implications of political neutrality on inherited normative categories, both at national and supranational level. Part II comprises case-studies reflecting the full spectrum of theoretical frameworks and concerns developed and explored by the theory-oriented chapters in the first part. The work explores a wide range of issues including the balance between autonomy, legitimacy and accountability, the taxonomy of agencies, the role and limits of expertise as a paramount justification for independence, ‘agentification’ as a result of internationalisation, and ‘agentification’ as a reflex and consequence of transnational polity-building within the EU.

Part I Administrative Autonomy and Democracy

2. The People, the Experts, and the Politicians: Is Expertise a Challenge to democratic Legitimacy? - Lucian Bojin

3. Rule of Lawyers or Rule of Law? On Constitutional Crisis and Rule of Law in Poland - Adam Czarnota

5. The Impact of National Accountability Agencies on the EU - Elena Simina Tănăsescu

6. De-politicization by Europeanization: the emergence of the fragmented state in South Eastern Europe - Martin Mendelski

9. The State Reform in Brazil: More of the Same? - Gilberto Bercovici

10. Implementation of Separation of Powers and Scope of Independence of Politically Neutral Organs in Russia - Sergei A. Belov

Afterword: The Need for Independent Regulatory Authorities in the Perspective of Contemporary Constitutionalism - Antonio La Spina

Elena Simina Tănăsescu is Full Professor of Constitutional Law, University of Bucharest, Romania. She held visiting professorships at universities in Europe and Latin America, was the representative of civil society in the Superior Council of Magistracy and the Romanian representative in the Agency for Fundamental Rights of the EU and in the Group of Independent Experts on the European Charter of Local Self-Government. Tănăsescu’s teaching and research focuses on Romanian and comparative constitutional law and European law.

The objectives of Studies in the Sociology of Law are threefold. First, the series aims to deepen the analysis of the socio-legal problems related to the enlarged European Union and the different paths of its constitutional process and policy. Second, it examines the many facets of legal cultures within and outside the European context in comparative perspective and in an open debate with extra European scholarship. Third, it focuses on the legacy of European legal thought while dealing with the new challenges of contemporary societies. Accordingly, the series adopts a line of enquiry that emphasizes the broader dynamic of legal cultures.