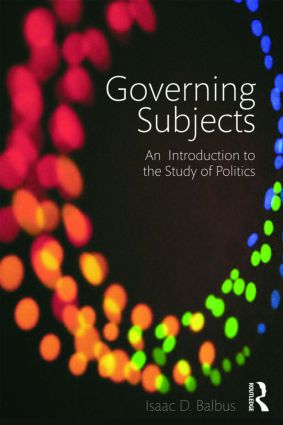 An Introduction to the Study of Politics, 1st Edition

This introduction to the study of politics explores the multiple meanings of "governance" as well as the several senses of what it means to be a "subject." It takes the reader on a journey through and across the domains of law and institutions, markets and power, and culture and identity, and shows how the understanding of any one of these domains demands an understanding of them all. The path through these related regions is marked by regular encounters with leading and competing thinkers—from the expected, such as James Madison, Robert Dahl, Michel Foucault, and Adam Smith, to the unexpected, such as Joseph Raz, Lisa Disch, Doug Henwood, and Joan Scott—that encourage the reader to evaluate their arguments for their internal coherence and explanatory power. Governing Subjects is at once a holistic and critical introduction to the study of politics.

"Isaac Balbus's Governing Subjects is not one but several books and all of them are successful. First there is a marvelously accessible survey of all the key issues in political and cultural theory. Second there is a critical (in the sense of serious) analysis of the philosophical and sociological arguments brought to bear on those issues in the last 200 years. And third there is his own explication and urging of a ‘reparative’ approach to the problems inherent in modernity and its discontents. The learning is obvious, but it is offered in a way that is always enlightening and never intimidating or pretentious. A real achievement."

"This stimulating book exhibits the intellectual range and pedagogical flair long associated with Isaac Balbus. Governing Subjects offers a bracing invitation to a capacious and deep, disciplined but cross-disciplinary, study of politics. Not just its primary undergraduate audience, but graduate students and faculty alike have much to gain by engaging with its bold arguments and learned assessments."

"American political science today is all too driven by concerns that render it unduly narrow in both methods and substance. In both these regards, Isaac Balbus's Governing Subjects is a welcome, valuable resource."

"This introduction to politics uniquely draws resources from both theoretical and empirical scholarship in political science. It is an introduction in the best sense: it not only covers the basics but it is written engagingly and accessibly to introduce students to challenging controversies. The dialogic structure of the chapters, which set opposing views in conversation with each other, lends itself to active learning strategies in the classroom."

Isaac D. Balbus is professor of political science at the University of Illinois at Chicago. He is the author of four previous books and has won several awards for excellence in teaching.