Government and Politics of the Contemporary Middle East
Continuity and change 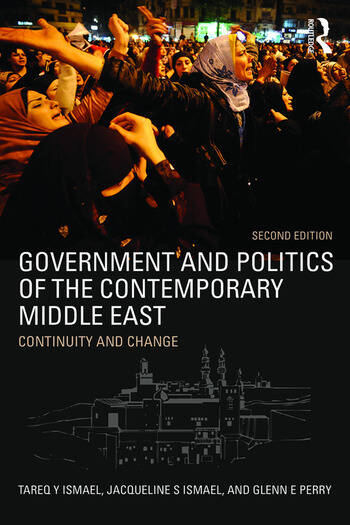 Government and Politics of the Contemporary Middle East: Continuity and change

This exciting new edition of the successful textbook for students of Middle Eastern politics provides a highly relevant and comprehensive introduction to the complexities of a region in constant flux. Combining a thematic framework for examining patterns of politics with individual chapters dedicated to specific countries, the book places the very latest developments and long-standing issues within an historical context, introducing key concepts from comparative politics to further explore the interaction between Middle Eastern history and the region’s contemporary political development.

Presenting information in an accessible and inclusive format, the book offers:

• Coverage of the historical influence of colonialism and major world powers on the shaping of the modern Middle East.

• A detailed examination of the legacy of Islam.

• Analysis of the political and social aspects of Middle Eastern life: alienation between state and society, poverty and social inequality, ideological crises and renewal.

• Case studies on countries in the Northern Belt (Turkey and Iran); the Fertile Crescent (Iraq, Syria and Lebanon, Israel/Palestine); and those West and East of the Red Sea (Egypt and the members of the Gulf Cooperation Council), moving through an historical examination to close analysis of the most recent developments and their political and social impacts.

A key introductory text for students of Middle Eastern politics and history at advanced undergraduate and postgraduate levels, this new edition has been extensively updated to also become a timely and significant reference for policy-makers and any motivated reader.

1.Introduction: Middle East politics: patterns of continuity and change PART I Dynamics in Middle East politics 2.The burden of history: from empire to nation states 3.The legacy of Islam: continuity and change PART II Major governments and politics The Northern Belt 4.The Republic of Turkey 5.The Islamic Republic of Iran The Fertile Crescent 6.The Republic of Iraq 7.The Syrian Arab Republic and the Lebanese Republic 8.Israel and Palestine West and east of the Red Sea 9.The Arab Republic of Egypt 10.The Arab Gulf states and the Gulf Cooperation Council (GCC)

is Professor of Social Work at the University of Calgary and founding co-editor of the International Journal of Contemporary Iraqi Studies. Her research interests and publications focus on Canadian social policy, international social welfare and social change in the Middle East, on which she has authored numerous articles and books. Her latest book in this area is Iraq in the Twenty-First Century: Regime Change and the Making of a Failed State (2015), co-authored with Tareq Y. Ismael.

"This book is a comprehensive and accessible survey of the states, societies and politics of ME. It is a lucid and informative work and a must read for all students of ME, policy makers and general readers."