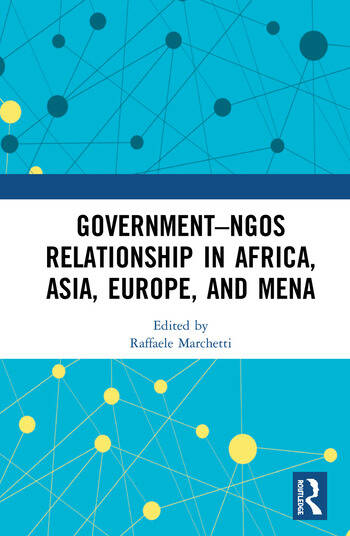 This volume brings together some of the most recent scholarship on government and civil society. It examines the axis of the relationship between national governments and civil society organisations (NGOs) by highlighting commonalities as well as differences among four key regions in the world. Using the stability vs. instability framework, the book explores a range of pertinent issues, including human rights, development, foreign policy, state-building, regime change, governance frameworks, wars and civil liberties. It studies diverse situations, from those entailing comprehensive cooperation to those involving politically contentious and revolutionary activities.

With case studies from Africa, Asia, Europe, and the Middle East and North Africa (MENA), this volume will be useful to scholars and researchers of political science, global politics, international relations, sociology, development studies, global governance and public policy, as well as to those in the development sector and NGOs.

Raffaele Marchetti is Senior Assistant Professor of International Relations in the Department of Political Science and the School of Government at LUISS, Rome, Italy. He has a PhD from the London School of Economics and his research interests concern global politics and transnational civil society. He also acts as an external expert for the European Commission and other public and private institutions on issues of governance, public policies, NGOs and security. In 2015, he produced one of the first MOOCs on IR for Iversity. In the past, he was rapporteur for the European Commission on Civil Society in Global Governance, and received the Lawrence S. Finkelstein Award from the International Studies Association (ISA). Among his publications are Global Strategic Engagement: State and Non-state Actors in Global Governance (2016); Partnerships in International Policy-Making: Civil Society and Public Institutions in European and Global Affairs (edited, 2016); Contemporary Political Agency (co-edited with B. Maiguashca, 2013); Global Democracy (co-edited with D. Archibugi and M. Koenig-Archibugi, 2011); Civil Society, Ethnic Conflicts, and the Politicization of Human Rights (co-edited with N. Tocci, 2011); Conflict Society and Peacebuilding (co-edited with N. Tocci, 2011); and Global Democracy: For and Against (2008).

‘One of the brilliantly conducted analyses of the development of non-state actors, represented by civil society structures. The book perfectly illustrates the growing activity of civil society in the world, connected not only with involvement in world politics, but also its emergence as a political protagonist, which shapes world politics. The authors carefully study the forms, nature and processes of civil society interaction with state structures and show that these processes can take place differently at the local and national levels. Theoretical grounds and concrete examples are in the focus.

The undoubted merit of the authors is that they were not limited to one country or one region, but show that the processes indicated by them, although in different ways, with different speeds, flow around the world, covering Africa, Asia, the Middle East and Europe. Despite the fact that the book covers almost all the continents except the Americas and Australia the focus of the study was on developing countries. This is not accidental. The processes of interaction of society with states in developed countries are analyzed in scientific literature, while what happens outside the most developed countries remains poorly understood. The authors of the book have successfully filled this gap.’

‘In recent times, the state has harnessed civil society organisations to deliver social goods, civil society has transcended national boundaries and gone global, and CSOs have become professionalised. These developments have immeasurably complicated the relationship between the state and civil society. Raffaele Marchetti has brought together gifted scholars and activists to explore new facets of this relationship, making for an invaluable contribution to the literature.’

‘In the 30 years since the rediscovery of civil society with the collapse of the Berlin Wall, civil society has gained prominence as a significant theme in social science research throughout the world. In this era of vigorous globalization with the fusion of domestic and international politics, civil society plays a crucial role in determining stability and success at all levels of government. Successfully integrating comparative studies from Africa, Asia, the Middle East, and Europe, this book targets diverse non-governmental actors and makes a major contribution to overcoming the inherent difficulties of standardized data collection in worldwide comparative studies.

The chapters in this edited volume focus on the relationship between the civil society and the state with particular emphasis on NGOs and NPOs. Essentially, in the dilemmas posed by resource problems and autonomy, the central issue involves the paradox of whether NGOs compete or cooperate with the state. This issue is further compounded by the analytical axes of stability and instability as outcomes.