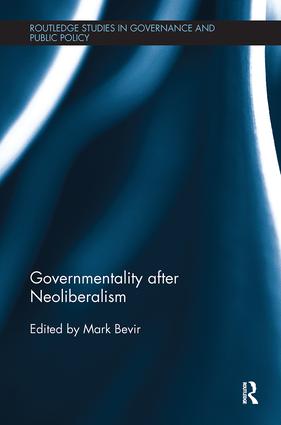 Neoliberalism has had a major impact on public policy but it has also perhaps obscured the equally dramatic spread of other policy tools based on significantly different forms of social science.

This book therefore explores the mixture of social technologies that have arisen since neoliberalism, sometimes alongside and sometimes in conflict with it, but generally as attempts to address problems created by the market reforms of a high neoliberalism. These have included attempts to spread networks, joining-up, and long term partnerships, and to build state capacity, social capital, and resilient communities. Thematically, each chapter is defined by its engagement with governmentality, specifically challenging governmentality theory to pay more attention to practices. The book also develops a complex and variegated account of neoliberalism and its afterlife as chapters highlight the different ways in which a range of market mechanisms and other technologies now coexist in different policy areas. Finally, the book moves beyond abstract discussions of both governmentality and neoliberalism to concrete demonstrations of this approach in action.

This text will be of key interest to scholars and students of governance, public policy, governmentality theory and more broadly to British Politics, social policy, and sociology.

2. Contemporary Spatial Planning: The Making and Remaking of Land Use Planning, Phil Allmendinger

3. Governing Urban and Regional Development in the UK: The Approach of the Coalition Government 2010-2015, Danny MacKinnon

7. Social Housing and the ‘New Localism’: A Strategy of Governance for Austere Times, Kim McKee

8. Network Leadership as Pastoral Power: The Governance of Quality Improvement Communities in the English NHS, Justin Waring and Graham Martin

9. Resilience and the Governmentality of Unknowns, Simin Davoudi

11. Countering the Changing Genealogies of Migration in the EU, Bal Sokhi-Bulley