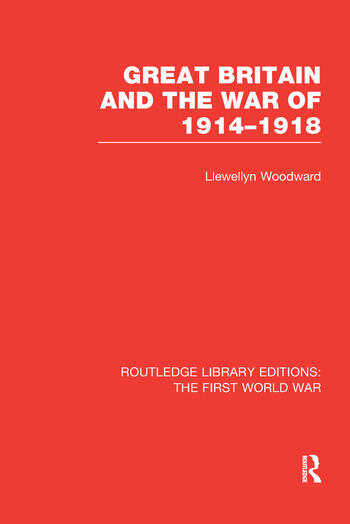 This volume covers the essential facts about Britain’s role in the First World War, not only militarily but also from a domestic point of view: the political and economic organisation of Britain for war, the extension of state control, the problems set by shortages of shipping and food. The book goes beyond the military defeat of Germany and her Allies to the armistice of November 11, 1918, the Peace Conference and the Treaty of Versailles.

Part 1: The Outbreak of War: the BEF: Deadlock on the Western Front and Disquiet at Home 1. The Immediate Origins of the War 2. The British Expeditionary Force 3. Trench Warfare on the Western Front 4. The Higher Direction of the War Part 2: The War Outside the Western Front: British Attacks on Turkey: Formation of the First Coalition Ministry 5. The expedition to Gallipoli 6. The Political Crisis of May, 1915 and the formaton of the First Coalition Ministry 7. The Expedition to Mesopotamia 8. Egypt, Palestine and Syria 1915-1918 Part 3: The Western Front in 1915 and 1916 9. The Western Offensives of the Spring of 1915 10. Allied Plans for 1916 11. Difficulties of the First Coalition Part 4: The War At Sea to the Autumn of 1916 12. The Grand Fleet in the North Sea 13. The Blockade of Germany Part 5: Great Britain and President Wilson’s Proposals for Bringing the War to An End, 1914-1917 14. Great Britain and the Diplomacy of President Wilson to the Autumn of 1916 15. British Miniters and Peace Terms in the Autumn of 1916 Part 6: Lloyd George Becomes Prime Minister 16. The Resignation of Asquith 17. Lloyd Geroge, Haig and Nivelle 18. The German Withdrawal to the Hindenburg line 19. The French Mutinies 20. Cambrai Part 7: The Establishment of the Supreme War Council 21. The Establishment of the Supreme War Council: Allied Plans for 1918 22. The Allies on the Defensive Part 8: The Last Two Years of the War at Sea 23. The Second German Submarine Campaign and the Allied Counter-Measures Part 9: The War in the Air 24. The RFC in 1914 25. German Bombing Attacks on Great Britain Part 10: The German Western Offensives, March – June 1918 26. The German Western Offensives 27. The Definition of Allied War Aims in 1918 28. The Military Defeat and Surrender of Germany Part 11: The Western Allies and the Bolsheviks 29. The Western Allies and the Bolsheviks, 1917 – 1919 Part 12: The Organisation of British Resources for Total War 30. The Transition from Peace to War 31. Labour Questions 32. Wages, Strikes 33. Shipping 34. Food Production and Rationing 35. Paying for the War Part 13: The Peace Settlement with Germany 36. The Peace Conference 37. The Treaty of Versailles 38. The German Observations on the Treaty and the Allied Reply 39. The Attitude of British Opinion to the Treaty of Versailles. Maps.

Multivolume collection by leading authors in the field