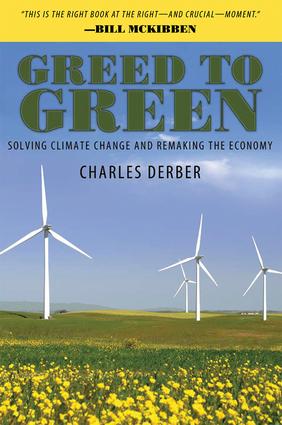 This book shows how we can solve the climate change crisis, which is the greatest threat humanity has faced. Charles Derber, a prominent sociologist and political economist, shows that global warming is a symptom of deep pathologies in global capitalism. In conversational and passionate writing, Derber shows that climate change is capitalism's time bomb, certain to explode unless we rapidly transform our economy and create a new green American Dream Derber shows there is hope in the financial meltdown and Great Recession we are now suffering. The economic crisis has raised deep questions about Wall Street and the US capitalist model. Derber systematically explores the causal links between capitalism and climate change, a taboo subject in the U.S, and opens up new thinking to solve both the economic and climate crises.

“Charles Derber’s urgent call to action on climate change connects to realistically upbeat ways to help resolve our energy, peace, and employment challenges. To read this book is to react with personal and social action."

"There's no way to solve climate change without also shifting, in profound ways, our idea of what constitutes success and growth and progress. This is the right book at the right—and crucial—moment.”

—Bill McKibben, author of The End of Nature and creator of the student-based "Step It Up" campaign to cut carbon emissions and of 350.org, today's leading climate change movement

"As this wonderfully inspiring book makes clear, the failure of the United States to achieve energy independence, eliminate potential oil wars, and truly address issues of social justice is a consequence of our corporate-dominated economy. Greed to Green brings home the fact that a people's movement to green the economy depends on creating a political system which subordinates the interests of big business to those of its citizens—and to the natural environment which sustains us all."

—Ross Gelbspan, Pulitzer Prize winner and author of The Heat Is On and Boiling Point

"Derber, professor of sociology at Boston College, makes a radical but persuasive argument that our current form of capitalism, with its short-term thinking, is the cause of climate change, and that we can't solve the latter without confronting the former. He contends that in order to be moved to action sufficient to avert calamitous global warming, we need to feel the crisis viscerally, not just understand it intellectually, and forge solutions that 'not only ward off the long-term catastrophe but also help solve today's most burning crises: economic deep recession, vanishing jobs, unstable oil prices, Middle East wars, rotten education, deteriorating public infrastructure, poverty, and financial insecurity.' Derber is optimistic about Obama's strategies but foresees 'enormous structural obstacles' to their implementation, and concludes that social justice and environmental movements—however riddled with weaknesses—are our 'best last hope for solving global warming on the urgent time scale required.' Despite the urgency and seriousness of his message, Derber conveys an appealing enthusiasm that may inspire concerned citizens to action rather than apathy or despair."

“Bringing a sociological imagination to the climate change debate, activist and academic Derber argues that as a symptom of underlying capitalist disease, global warming cannot be solved by green technology alone: social and political innovation is also necessary. His critique is trenchant . . . Derber writes in a lively, “hurry-up” style reflecting, no doubt, the urgency of the global warming problem.”

“Derber tackles a plethora of misconceptions about climate change, and his text is likely to have a profound impact due to the eloquent and comprehensible diction that he employs to explain complex socio-ecological interactions. Furthermore, his insightful analysis of the interconnections between the American short-term mindset, climate change, and the crisis-riddled economy addresses many of the misconceptions and lapses of awareness the general American public holds regarding both environmental and social justice.”