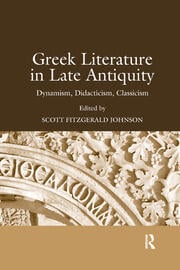 Late Antiquity has attracted a significant amount of attention in recent years. As a historical period it has thus far been defined by the transformation of Roman institutions, the emergence of distinct religious cultures (Jewish, Christian, Islamic), and the transmission of ancient knowledge to medieval and early modern Europe. Despite all this, the study of late antique literary culture is still in its infancy, especially for the Greek and other eastern texts examined in this volume. The contributions here presented make new inroads into a rich literature notable above all for its flexibility and unparalleled creativity in combining multiple languages and literary traditions. The authors and texts discussed include Philostratus, Eusebius of Caesarea, Nonnos of Panopolis, the important St Polyeuktos epigram, and numerous others. The volume makes use of a variety of interdisciplinary approaches in an attempt to provoke discussion on change (Dynamism), literary education (Didacticism), and reception studies (Classicism). The result is a study which highlights the erudition and literary sophistication characteristic of the period and brings questions of contextualization, linguistic association, and artistic imagination to bear on little-known or undervalued texts, without neglecting important evidence from material culture and social practices. With contributions by both established scholars and young innovators in the field of late antique studies, there is no work of comparable authority or scope currently available. This volume will stimulate further interest in a range of untapped texts from Late Antiquity.

Part 1 Dynamism: New themes and styles in Greek literature, a title revisited  The dynamic reception of Theodore of Mopsuestia in the 6th century: Greek, Syriac, and Latin.  Apollonius of Tyana in Late Antiquity.  Part 2 Didacticism: Eusebiusa (TM) Praeparatio Evangelica as literary experiment  Instruction by question and answer: the case of Late Antique and Byzantine erotapokriseis.  Rhetorical and theatrical fictions in the works of Chorikios of Gaza.  Part 3 Classicism: Writers and audiences in the early 6th century  The Hellenistic epyllion and its descendants.  The St Polyeuktos epigram (AP 1.10): a literary approach.  Late Antique narrative fiction: apocryphal acta and the Greek novel in the 5th-century Life and Miracles of Thekla.

Scott Fitzgerald Johnson is a Junior Fellow in the Harvard Society of Fellows.

’This interesting volume - the result of a conference in Oxford in 2004 - covers unfamiliar ground, and covers it in challenging and innovative ways.’ Medium Aevum ’I can state that this book accomplishes what it sets out to do. It gives the reader a new way to investigate and consider late antique authors, texts, and literary trends. It helps the reader better understand what was happening in Late Antiquity and goes a long way in counteracting the pejorative view often attributed to the authors and events of Late Antiquity. This is a collection worth having and should serve well those interested in this period.’ The Medieval Review ’Altogether, this volume offers an excellent collection of individual essays and if, inevitably, the three headings impose a somewhat artificial unity, they do give the work a coherent structure while reflecting the spirit of literary output in the late antique world.’ Journal of Hellenic Studies