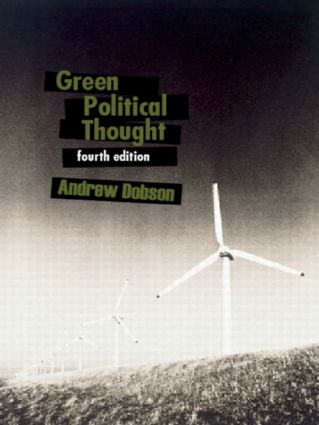 This highly acclaimed introduction to green political thought is now available in a new edition, having been fully revised and updated to take into account the areas which have grown in importance since the third edition was published.

Andrew Dobson describes and assesses the political ideology of ‘ecologism’, and compares this radical view of remedies for the environmental crisis with the ‘environmentalism’ of mainstream politics. He examines the relationship between ecologism and other political ideologies, the philosophical basis of ecological thinking, the potential shape of a sustainable society, and the means at hand for achieving it.

Green Political Thought remains the starting point for all students, academics and activists who want an introduction to green political theory.

'Green Political Thought remains the definitive text on the political ideology of ecologism. Indeed, it has now acquired the status of a classic in the field. In this fourth edition, the distinctive features of ecologism remain as sharply etched as they were in the first edition but Dobson has revised and updated the rich variety of internal debates among green political theorists and activists, including a shift in focus from ethics to politics, and from radical resistance to ‘visionary pragmatism’. - Robyn Eckersley, University of Melbourne, Australia

'Andy Dobson first made his statement about a green ideology sixteen years ago, and it quickly became the book on environmental political thought, against which all others were compared. In this new edition, (Andy) Dobson's thorough and lucid account of "ecologism" once again sets the standard. It should be the first place to turn for a comprehensive picture of ecological thought and the arguments in the field.' - David Schlosberg, Northern Arizona University, USA