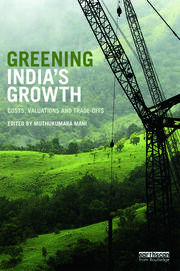 India’s sustained and rapid economic growth offers an opportunity to lift millions out of poverty. But this may come at a steep cost to its environment and natural resources. This insightful book analyses India’s growth from an economic perspective and assesses whether India can grow in a "green" and sustainable manner. Three key issues are addressed.

The first is the physical and monetary costs and losses of environmental health and natural resources driven by economic growth. The authors undertake a monetary valuation and quantification of environmental damage, using techniques that have been developed to better understand and quantify preferences and values of individuals and communities in the context of environmental quality, conservation of natural resources, and environmental health risks. The second part estimates the value of ecosystem services from the major biomes in India using state-of-the art methods with a view to preserving them for the future. The third section provides a menu of policy instruments to explore trade-offs between economic growth and environmental sustainability using a Computable General Equilibrium approach with particular attention to air pollution.

The conclusions focus on the way forward in terms of policies, measures and instruments as India has to balance the twin challenges of maintaining economic prosperity while managing its environmental resources.

4. What are the Trade-offs?

Annex 2: Methodology for Estimating the Cost of Natural Resource Degradation

Annex 3: Details of the Meta-Analysis Functions used in Estimating Value of Ecosystem Services

Annex 4: Description of the CGE Model

"In the decades ahead, India is poised to overtake Japan and become the third largest economy in the world. Such economic expansion will no doubt hasten environmental degradation and leave India with a gigantic pollution footprint and associated damage to the health and general well-being of its citizens. But how big is this cost likely to be? Could India afford to "grow now and clean up later"? What impact will this ecological and environmental abasement have on India's plans to lift millions out of poverty? These questions are easy to pose but tough to answer dispassionately with cold, hard numbers. This volume, based on research conducted under the auspices of the World Bank and edited by stalwart environmental economist Mani, attempts to do exactly that. Using state-of-the-art techniques, it attaches numbers to the costs associated with environmental degradation in India; assigns values to the loss of biodiversity and ecosystem viability; and uses computable general equilibrium modeling to explore the trade-offs between economic growth and environmental sustainability. The volume is exceptionally well written, especially considering the technical nature of the subject matter. The conclusion leaves the reader with hope that policy action today could make matters better for millions to come. Summing Up: Highly recommended. Upper-division undergraduate through professional collections." – J. Bhattacharya, Iowa State University in CHOICE

"Given the growing population, urbanization and the drive towards greater economic wellbeing, there is little doubt that the environmental challenges will continue to increase steadily. Substantive strengthening of the policy and institutional framework will be required in order to manage these environmental challenges. The conclusions of this study focus on the way forward in terms of policies, measures and instruments as India has to balance the twin challenges of maintaining economic prosperity while managing its environmental resources." – from the foreword by Philippe Le Houérou, Vice President of  South Asia at the World Bank Group

"Greening India's Growth is timely, very relevant and provides a framework for a pattern of development that is designed to bring about economic development in a manner that imposes the least impact on the environment, as well as on resource intensity, and therefore embodies fully the principle of sustainability. I welcome the book’s contribution to the debate between economic growth and environmental sustainability in the Indian context.

It rightly argues that the way to resolve the conflict between environment and development is to make the tradeoffs explicit. By putting numbers to the environmental costs of our growth process, the book highlights why, 'Grow now, clean up later' is no longer an option for India. Such analysis must be mainstreamed into our policies and plans.

Like in many other countries, the debate over growth versus environment is also active in India. This book makes a significant contribution to this debate by providing analytical insights on how failure to act now could constrain long-term productivity and hence growth prospects. It also highlights the needs to compute green Gross Domestic Product (green GDP) as an index of economic growth with relevant environmental costs and services factored in." – R. K. Pachauri, Director-General, The Energy and Resource Institute, India and Chairperson of the Intergovernmental Panel on Climate Change (which was awarded the Nobel Peace Prize in 2007)

"Greening India’s Growth makes a significant contribution to the 'growth versus environment' debate by suggesting that there are low-cost policy options that could significantly bring down environmental damage without compromising long-term growth objectives. By linking sustainability with public health and livelihood issues, the book highlights the need for Green National Accounting so that environmental costs and services are factored into the growth process." – Jairam Ramesh, Minister of Rural Development and Minister of Drinking Water and Sanitation, and Former Minister of State at the Ministry of Environment and Forests, India

"Like in many other countries, the debate over growth versus environment is also active in India. Greening India's Growth makes an important contribution to this debate by suggesting that there are low-cost options to reducing environmental damage that are not only affordable in the long-term but would also be offset by the significant health and productivity benefits." – Onno Ruhl, India Country Director, World Bank