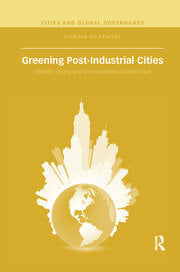 City greening has been heralded for contributing to environmental governance and critiqued for exacerbating displacement and inequality.

Bringing these two disparate analyses into conversation, this book offers a comparative understanding of how tensions between growth, environmental protection, and social equity are playing out in practice. Examining Chicago, USA, Birmingham, UK, and Vancouver, Canada, McKendry argues that city greening efforts were closely connected to processes of post-industrial branding in the neoliberal economy. While this brought some benefits, concerns about the unequal distribution of these benefits and greening’s limited environmental impact challenged its legitimacy. In response, city leaders have moved toward initiatives that strive to better address environmental effectiveness and social equity while still spurring growth. Through an analysis that highlights how different varieties of liberal environmentalism are manifested in each case, this book illustrates that cities, though constrained by inconsistent political will and broader political and economic contexts, are making contributions to more effective, socially just environmental governance.

2. From Keynesianism to Liberal Environmentalism

8. Conclusion – Cities and the Challenge of Environmental Governance

Corina McKendry is Associate Professor of Political Science and core faculty of the Environmental Program at Colorado College.

'Can the world’s cities save Earth’s environment? As international environmentalism becomes ever more sclerotic, growing numbers of cities across the world are proclaiming their sustainability bona fides through programs and projects rooted in what Corina McKendry calls "green urban entrepreneurialism." But are these programs any more than green window dressing, designed to attract trendy, upscale people? Dr McKendry looks closely into three world cities—Chicago, Vancouver and Birmingham, UK—to assess whether Being Green is more than just another cliché and finds that it does mean something. This extraordinary book should be read widely by students, scholars and citizens who want to make a difference within their cities as well as across the world as a whole.'—Ronnie D. Lipschutz, Professor of Politics, University of California, Santa Cruz, USA

'By using comparative methodology, McKendry sets this book apart from most books on cities, which tend to be monographs. With rich, comparative data this book illuminates the similarities and differences of efforts to green cities in a multinational context. Moreover, McKendry produces a highly productive typology of "liberal environmentalisms" that give us a new conceptual tool to understand the contested political project of urban sustainability.'—Nik Janos, Assistant Professor, California State University, Chico, USA

'Greening Post-Industrial Cities advances our understanding of cities in global environmental governance by placing the urban greening and environmental justice literatures into conversation and exploring how "varieties of liberal environmentalism" have played out in different urban contexts. With healthy skepticism and hopeful pragmatism, McKendry helps us imagine cities as sites for creating a more equitable and sustainable future.'—Michele M. Betsill, Department of Political Science, Colorado State University, USA

'Analysts and practitioners alike have long recognized that cities are major actors in, and arenas of, global governance. By their nature they are internally complex, diverse and contested. In order to better understand them, therefore, we need theoretically informed empirical studies that capture city dynamics across time rather than at any one turning point. Corina McKendry’s book contributes profoundly to the study of cities by providing an empirically fine-grained comparison of the greening of three important cities, based on a compelling theoretical scheme that will inform and influence future research on urban politics and global governance.'—Dimitris Stevis, Department of Political Science, Colorado State University, USA