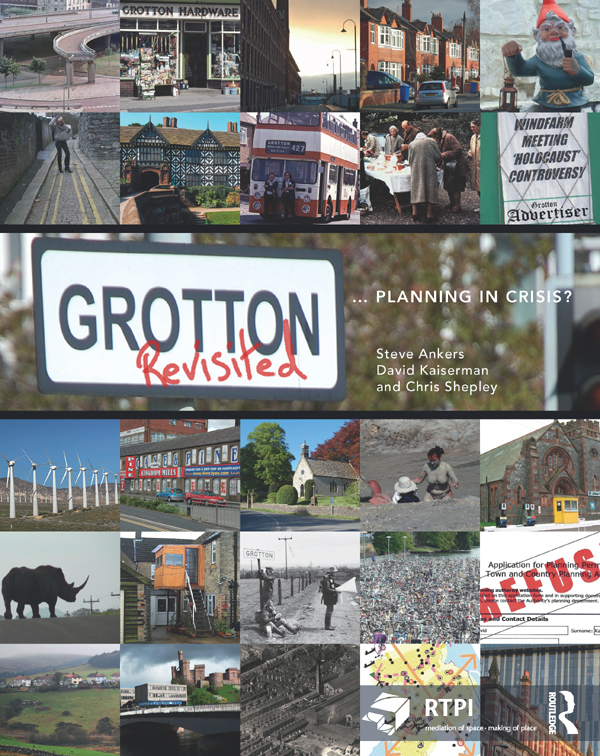 Some thirty years ago the small Metropolitan County of Grotton found itself bathed in the bright glare of publicity as The Grotton Papers lifted the lid on the inner workings of the six planning departments of this hitherto little remarked corner of England.

The intervening years have seen Grotton's County Council aim at the admirable and mostly achievable target of becoming "average with moderate prospects of remaining average" in the Government rankings, and the struggles of the District Councils to come to terms with planning in the late twentieth – let alone twenty-first – century are once again under the spotlight.

The original authors of The Grotton Papers have come together once more to offer an experienced and surprisingly unjaundiced look at the way the British planning system works. Their comprehensive survey allows real lessons to be learnt from what Grotton has – and just as importantly hasn't – done since they were last in town.

Grotton Revisited is without doubt the finest (and indeed the only) satirical book on this vitally important subject. It is suitable for planners of all ages and abilities, and will be essential reading for anyone who has ever had contact with the planning system, or thinks they may know someone who has. First class entertainment and education for professionals and general readers alike.

Published in association with the RTPI.

"Loved it , I almost had to be resuscitated – Grotton Revisited will immediately become the standard text on Planning Practice in every planning school in the UK and far beyond. The fact that it will cause every planning student in the land to abandon their courses, for alternative vocations in investment banking or alternative therapies, is unfortunate"– Professor Sir Peter Hall, Bartlett Professor of Planning and Regeneration, University College London, UK

"This book makes you laugh with the planning system, not at it! A timely reminder of the importance of planning in all our lives and the problems which always accompany attempts at perfection" – John Gummer, Conservative MP for Suffolk Coastal and former Secretary of State for the Environment, UK

"It gave me a great deal of pleasure to review my acquaintance with your area’s crumbling infrastructure, decaying terraces, and blighted Country Park" – Nick Raynsford, Labour MP for Greenwich and Woolwich and Former Minister for Planning, UK

"Grotton Revisited exposes with a biting satire and razor-sharp wit the inadequacies and inefficiencies of the planning system, and lays bare the dull, clumsy, two-dimensional box-ticking that underpins so much of the system… This is a wonderfully funny book… hopefully it will also act as a catalyst for reform" – Norman Baker, Lib Dem MP for Lewes, UK

"Like a spoof April 1 general election poster (courtesy of The Guardian in 2010) which briefly fooled too many serious people, this classic satire-cum-parody-meets-real-life will - sadly - touch a raw nerve, as anyone dealing with officialdom, and its increasingly unfathomable language in the 90s and Noughties will attest!… A fabulous read!" – Peter Hetherington, former Guardian Regional Affairs Editor and TCPA Vice President

"The funny thing is, it's no joke." – Michael Hebbert, University of Manchester, UK

"It is an extremely funny book, but close enough to the reality of planning practice to be unsettling. It will certainly make you laugh, but it will be a rather nervous sort of laughter." – Australian Planner

Message from the President of the Royal Town Planning Institute 1. Planning in Crisis 2. The County of Grotton and the Five Districts of Which it is Comprised of 3. The Development Plan in Crisis 4. Development Management in Crisis: A Case Study from Dunromin 5. Regeneration in Crisis 6. The Countryside in Crisis 7. Transport in Crisis 8. The Environment in Crisis, or What’s Posterity Ever Done for Me? 9. Management in Crisis The Grotton Advertiser: a Special Supplement to mark the 31st Anniversary of the 1979 "Planning in Crisis" Conference Appendices 10. Notes for delegates to the "Planning in Crisis" Conference 2010 11. An Invitation to the Secretary of State to address the Conference 12. An Important Decision relating to a Planning Appeal 13. An Extract from the Grotton Design Guide 14. An Appeal on Behalf of the Patrick Abercrombie Home for Distressed Planners by Alexander Quibble CB. Index

David Kaiserman worked as a town planner for 30 years with Manchester City Council and the Greater Manchester Council. During this time, he led teams which prepared the County’s Green Belt and the City Council’s first Unitary Development Plan, and played a major role in a number of high-profile public inquiries. In 1996 he left the post of Acting Director of Planning and Environmental Health at the City and joined TRA Ltd as a Senior Associate, providing training and consultancy support for local authority planners and elected members. At the same time he became a consultant planning inspector. Since 2007 he has been trying to avoid having anything to do with writing this book.

Chris Shepley CBE was the Chief Planning Inspector from 1994 to 2002. Previously he was Director of Development at Plymouth City Council (1985–1994), and held various posts including Deputy County Planning Officer at Greater Manchester Council (1973–1985), and at Manchester City Council (1966–1973). He was President of the RTPI in 1989. He is Hon Visiting Professor at the University of Westminster and held a similar post at the University of Manchester (1990–1994). He has an Honorary DSc from the University of the West of England. He is on the RTPI General Assembly, and the Policy Council of the TCPA, has been on the Council of the European Council of Town Planners and the Planning Aid Council, and is a trustee of the Theatres Trust. He writes a regular column in 'Planning'. He now works as an independent planning consultant. He also grumbles competently.

Published in conjunction with the Royal Town Planning Institute [http://www.rtpi.org.uk/], this series of leading edge texts is intended for academics, educators, students and practitioners in planning and related fields. Written by globally renowned authors the series looks at all aspects of spatial planning theory and practice from a comparative and international perspective.