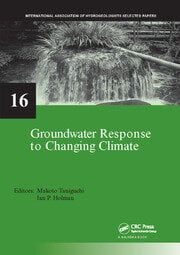 Groundwater systems are vital to both society and the environment, supporting food production and many other ecosystem services. Sustainable management of this vital resource for future generations requires a sound understanding of how groundwater might respond to the inevitable changes in future climate. In this volume, recent developments within the interlinked areas of the response of groundwater systems to climate variability and climate change are highlighted, using contemporary field investigations and monitoring of aquifers, numerical simulations of aquifer response to climate change predictions and paleohydrogeological studies of ancient groundwater systems. The book provides an up-to-date description of the relationship between groundwater behaviour and ancient, historical, current and future climates for a range of diverse aquifer systems around the world.

Contents:
1. Vulnerability of groundwater resources in different hydrogeological conditions to climate change.
2. Changing climate and saltwater intrusion in the Nile delta, Egypt.
3. Impact of climate variability on the water resources in the Draa basin (Morocco): Analysis of the rainfall regime and groundwater recharge.
4. Effects of global warming and urbanization on surface/subsurface temperature and cherry blooming in Japan.
5. Temporal variation of stable isotopes in precipitation at Tsukuba, Ogawa and Utsunomiya City in Japan.
6. The 14C age of confined groundwater in a sandy-muddy Pleistocene aquifer.
7. Understanding groundwater flow regimes in low permeability rocks using stable isotope paleo records in porewaters.
8. Mineralogical analysis of a long-term groundwater system in Tono and Horonobe   area, Japan.
9. Verification of 4He and 36Cl dating of very old groundwater in Great Artesian Basin, Australia.
10. Land subsidence characteristics of the Jakarta Basin (Indonesia) and its relation with groundwater extraction and sea level rise.
11. Alluvial fans - importance and relevance: a review of studies by research group on hydro-environments around alluvial fans in Japan
12. Study on the relation between groundwater and surface water in Toyohira-gawa alluvial fan, Hokkaido, Japan.
13. Present state of water balance in Isawa-gawa alluvial fan, Iwate Prefecture, Japan, and its future prospect under global warming.
14. Study of the groundwater flow system in the Echi-gawa alluvial fan, Shiga Prefecture, Japan.
15. Modelling of groundwater flow characterized by hydrogeologic structures and interaction with surface water at Shigenobu-gawa alluvial fan, Ehime Prefecture, Japan, with a preliminary examination of the influence of climate change..
16. Hydrogeology and water balance in R. Chikugo-gawa Plain, Fukuoka Prefecture, Japan.