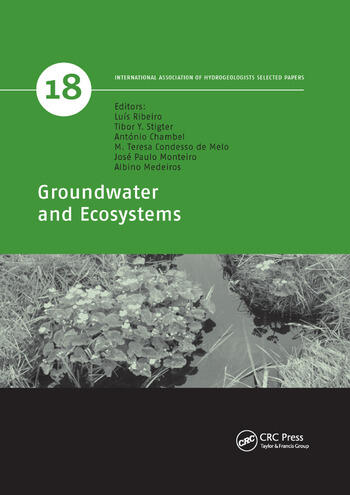 Groundwater resources are facing increasing pressure from consuming and contaminating activities. There is a growing awareness that the quantitative and qualitative preservation of groundwater resources is a global need, not only to safeguard their future use for public supply and irrigation, but also to protect those ecosystems that depend partially or entirely on groundwater to maintain their species composition and natural ecological processes. Known as groundwater dependent ecosystems (GDEs), they have been a fast-growing field of research during the last two decades.
This book is intended to provide a diverse overview of important studies on groundwater and ecosystems, including a toolbox for assessing the ecological water requirements for GDEs, and relevant case studies on groundwater/surface-water interactions, as well as the role of nutrients in groundwater for GDEs and ecosystem dependence (vegetation and cave fauna) on groundwater. Case studies are from Australia (nine studies) and Europe (12 studies from nine countries) as well as Argentina, Canada and South Africa.
This book is of interest to everybody dealing with groundwater and its relationship with ecosystems. It is highly relevant for researchers, managers and decision-makers in the field of water and environment. It provides up-to-date information on crucial factors and parameters that need to be considered when studying groundwater-ecosystem relationships in different environments worldwide.

Luís Ribeiro graduated in Mining Engineering at the Instituto Superior Técnico (IST) of the Technical University of Lisbon (UTL) in Lisbon, Portugal in 1978 and completed his PhD in Mining Engineering (Hydrogeology) at IST-UTL in 1992. He is currently Associate Professor at IST, Director of the Geo-Systems Centre/CVRM, and President of the Portuguese Chapter of the International Association of Hydrogeologists (IAH). He was also President of the Scientific Committee of XXXV IAH Congress “Groundwater and Ecosystems” held in Lisbon in 2007.

Tibor Y. Stigter completed his MSc in Geographical Hydrology in 1997 at the Vrije Universiteit Amsterdam, the Netherlands and his PhD in Engineering Sciences (Hydrogeology) in 2005 at the Instituto Superior Técnico (IST), Lisbon, Portugal. He has worked and taught classes at the Universidade do Algarve (UALG) in Faro, Portugal. He currently holds a Researcher position from IST, working on groundwater, contamination, climate change and sustainability. As a member of the Geo-Systems Centre/CVRM, he works both at IST and UALG, coordinating research projects and supervising MSc and PhD students.

Born in 1961 in Sardoal, Portugal, António Chambel obtained his PhD in Geology, specialising in Hydrogeology, at the University of Évora, Portugal,