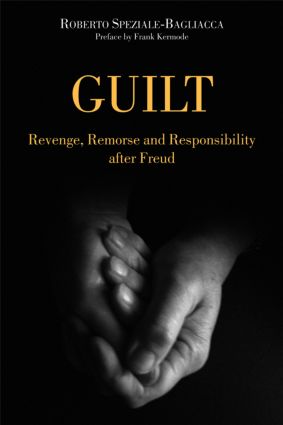 Guilt is an original, closely argued examination of the opposition between guilty man and tragic man. Starting from the scientific and speculative writings of Freud and the major pioneers of psychoanalysis to whom we owe the first studies of this complex question, Roberto Speziale-Bagliacca goes on to focus on the debate between Klein and Winnicott in an enlightened attempt to remove blame and the sense of guilt from religion, morality and law.

Drawing on an impressive range of sources - literary, historical and philosophical - and illustrated by studies of composers, thinkers and writers as diverse as Mozart and Chuang Tzu, Shakespeare and Woody Allen, Guilt covers a range of topics including the concept of guilt used within the law, and the analyst's contribution to the client's sense of guilt.

Previously unavailable in English, this book deserves to be read not only by psychoanalysts, philosophers. scholars and forensic psychiatrists interested in the theory of justice, but also be the ordinary educated reader.

Passionate and absorbing, at times, moving and amusing, this book marks a breakthrough in a vast area of human behaviour. - Jan de Viller, Historian

Guilt is not only a legal and moral concept, as well as a state of mind, but it is also an omnipotent way of thinking. This intriguing book leads us to such a conclusion and indeed obliges us to recognise its truth. - Joyce McDougall, author of Theatres of the Mind

A unique book, at once obvious and revealing, which conveys all the nuances of guilt. - Nicolas Barker, Chairman of the London Library

A View from the Past. The Use and Abuse of Theory. The 'Schizophrenic Paradox': Two Types of Logic. The Search for a Name. Responsibility. The Dilating Pupil: Counter-transference. The Devil with Breasts: An Interlude. Ideology and Guilt. The Double Bind and Guilt. Preconscious and Consciousness. Projective Identification and Containment.