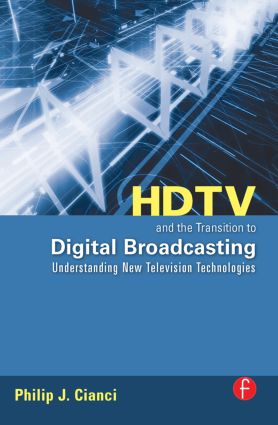 HDTV and the Transition to Digital Broadcasting

HDTV and the Transition to Digital Broadcasting bridges the gap between non-technical personnel (management and creative) and technical by giving you a working knowledge of digital television technology, a clear understanding of the challenges of HDTV and digital broadcasting, and a scope of the ramifications of HDTV in the consumer space. Topics include methodologies and issues in HD production and distribution, as well as HDTV's impact on the future of the media business. This book contains sidebars and system diagrams that illustrate examples of broadcaster implementation of HD and HD equipment. Additionally, future trends including the integration of broadcast engineering and IT, control and descriptive metadata, DTV interactivity and personalization are explored.

The book is for non- or semi-technical managers and executives who need an overview of of HDVT/DVT Tansition and the its role in business.

1. The Dawn of HDTV and Digital Television2. A Compressed History of HDTV3. The Fundamentals of DTV4. The DTV Receiver5. HDTV and DTV Standards 6. The Transition to Metadata7. Emerging Technologies and Standards8. The Future and Digital Broadcasting

Philip Cianci's involvement in the HDTV effort began at Philips Research in the 1980s, where, as a designer, he was involved the development of Advanced Television Systems, culminating in the Grand Alliance HDTV prototype. Mr. Cianci was at ESPN during the construction and commissioning of the Digital Center and the debut of SportsCenter in HDTV. He is the Editor of the "Transition to Digital Broadcast Engineering Magazine e-Newsletter and is collaborating in the development of an HDTV archive with the Smithsonian Institution.