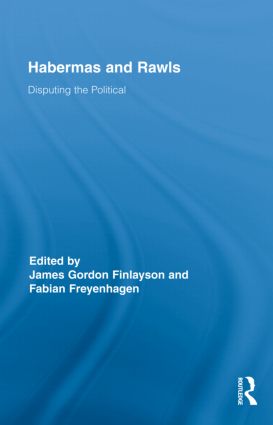 Habermas and Rawls are two heavyweights of social and political philosophy, and they are undoubtedly the two most written about (and widely read) authors in this field. However, there has not been much informed and interesting work on the points of intersection between their projects, partly because their work comes from different traditions—roughly the European tradition of social and political theory and the Anglo-American analytic tradition of political philosophy. In this volume, contributors re-examine the Habermas-Rawls dispute with an eye toward the ways in which the dispute can cast light on current controversies about political philosophy more broadly. Moreover, the volume will cover a number of other salient issues on which Habermas and Rawls have interesting and divergent views, such as the political role of religion and international justice.

Dr. J. G. Finlayson is Senior Lecturer in Philosophy and Head of Social and Political Thought at the University of Sussex. He is a contributor to the Oxford Handbook on Continental Philosophy, ed. Leiter and Rosen, 2007, author of numerous philosophical articles on Habermas moral and political thought appearing in Inquiry, European Journal of Philosophy and Journal of Political Philosophy, and of the widely selling Habermas: A Very Short Introduction, OUP 2005.

Dr. F. Freyenhagen is a lecturer in political philosophy at the University of Essex. He studied PPE at Oxford and philosophy at Sheffield and taught in the philosophy department at Cambridge. He works among other things on Rawls, and co-edited a collection of essays on his work (The Legacy of John Rawls), published with Continuum 2005 and reprinted in paperback 2007.

James Gledhill is about to complete a Ph.D. at the London School of Economics on the political philosophies of Habermas and Rawls.