Hamas, Popular Support and War in the Middle East
Insurgency in the Holy Land 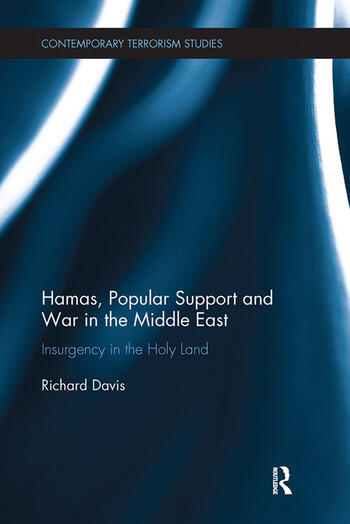 Hamas, Popular Support and War in the Middle East: Insurgency in the Holy Land

This book offers a new understanding of the nature of power-seeking insurgent groups by empirically examining the use of violence by Hamas in the Palestinian-Israeli Conflict.

Though Hamas has learned to ride the tides of popular support, it remains suspended between its quest to achieve the values of its ardent supporters (reclamation of land through force) and the desire to grow popular support. This tension is reflected in how and when the group exercises violent resistance. The theoretical framework applied in this volume provides a simple construct to understand the dynamics that result in use and non-use of violence under changing environmental conditions by Hamas, but could be applied more broadly to other power-seeking insurgent groups, including ISIL. The book weaves together the dynamics between violent actions and internal and external influences on Hamas, including: expressed values of the group, Palestinian popular support measures, leaders’ personalities and innovation (weapons and tactics), Israeli influence and targeted killings, peace processes and conflicts in Gaza, Syria, Iraq and Egypt. With newly assembled datasets on Hamas’ violent acts and public statements, Israeli Targeted Killings, historical measures of popular support and extensive field interviews, the book offers a fresh perspective on insurgent group violence by demonstrating under what conditions the group exercises violence or refrains from doing so.

This book will be of much interest to both policy makers and students of the Arab-Israeli conflict, political violence, Middle Eastern politics, security studies and international relations in general.

1. Hamas and the Palestinians as a Case Study 2. The Science of Armed Groups, Ethno-Nationalism, Insurgencies and Terrorism 3. The Origins and Structure of Hamas 4. Armed Resistance, Weapons, Domestic & Foreign Relations 5. Foundation Era: The First Intifada, Capturing Palestinian Sentiment and the Hunt for Weapons 6. Oslo Era: The Engineer, Israeli ‘Finger-Tip’ Policy, the Rise of Netanyahu & Mishal, Support for Violence and the Destruction of Oslo 7. 2nd Intifada Era: Intifada, Israeli Targeted Killing, Shifting Interests of Hamas and the Confluence of Events that Temporarily Suspend Hamas’s Use of Violence 8. Election Era: The Strange Road to Election Victory, Failed Reconciliation and Pathway to Civil War 9. Governance Era Part One: ‘No to Dinner, How About Lunch?’, Gaza, Tax, Tunnels and Gaza War I 10. Governance Era Part Two: Building Hamastan, Egyptian and Syrian Revolutions, Pathway to Gaza War II 11. Pathway Pathway to Reconciliation Deux, Kidnappings, Gaza War III, Turning the Keys over to Fatah and the Implications of ISIL 12. Determinants of Hamas Violence and Implications for Other Power-Seeking Insurgent Groups

Richard Davis (a former policy director at The White House) is the CEO and Managing Senior Fellow of Artis International and a Founding Fellow of the Centre for the Resolution of Intractable Conflict in Harris Manchester College and the Department of Politics and International Relations at the University of Oxford. He is also a Professor of Practice in the School of Politics and Global Studies at Arizona State University.

‘This impressive book is an outstanding contribution to the study of insurgent groups. While focusing on Hamas as a case in point, Davis has formed a new methodology for studying the relationship between insurgent groups' public support and their decision to use violence. Using both interviews with a broad array of actors and observers and sophisticated quantitative analysis of violent activity and public opinion polls, Davis' work has set a new standard of research in the area of political violence. It is a must reading for anyone interested in this field.’ -- Ariel Merari, Tel Aviv University, Israel

‘This book is a must read for anyone who wants to understand the complexity of the conflict and the tensions between Hamas and other rival groups in the Middle East. The analysis is based on solid empirical data and uses modern methodologies of field work, analyzing sacred values and statistical evidence for exploring Hamas's use of violence. Its conclusions would be a great help to the US and its allies in defeating radicalism, and have therefore implication for ISIS as well.’ -- MG (ret.) Isaac Ben-Israel, Israeli Space Agency, Israel

‘An insightful study of Hamas behavior and use of violence. It fills a serious gap in our knowledge of the group’s decision making process and the critical role played by public opinion in its calculus. Furthermore, the book provides a greater understanding of the role of violence in Palestinian-Israeli relations since the signing of the Oslo agreement in 1993. The special focus on the second intifada helps us better understand the dynamics of its eruption as well as its resilience and the reasons it gradually abated. The discussion on the Palestinian 2006 elections helps us understand how Hamas shrewdly capitalized on its intifada years to integrate itself into the Palestinian political system. As the book traces the evolution of Hamas-Israel relations and wars, it also provides an excellent examination of Hamas’ regional calculations during and after the "Arab Spring," as well as its relations with its domestic counterpart, Fatah, reconciliation efforts, and its governance record in the Gaza Strip. The book provides a good example of the predicament a militant Islamist group faces between its responsibility to care for the population that elects it and its own "resistance" value that the group declares to be its essence.’ -- Khalil Shikaki, Palestinian Center for Policy and Survey Research, Palestinian Territories

‘Using multiple methods and drawing upon a diverse array of sources, including information gathered during fieldwork in the Palestinian Territories and in Israel, this impressive volume offers, first, a thorough account of Hamas’s evolution across a periodized history of the years between the first intifada and the present and, second, a careful testing of hypotheses about the determinants and consequences of politically motivated violence.  Filled with valuable information and insight, the book can be read with much profit both as rich and detailed history and as a theoretically-motivated investigation into political violence.  Essential reading for those interested in the organization, behavior, and strategic thinking of Hamas and in generalizable insights about the use of violence by insurgent groups.’ -- Mark Tessler, University of Michigan, USA

'Rich Davis has taken a giant leap forward in the study of insurgent groups by analysing the relationships between the armed group and its community support base, and the dynamics in its use of violence. Focusing on Hamas, Davis has provided us with an impressive mixed methods study, including interviews with insurgent and counterinsurgent leaders, an intricate examination of opinion poll data, and a detailed plotting and contextualisation of acts of violence over time. The work will recast thinking about violence in the Israeli-Palestinian struggle, but its approach and conclusions have lessons for how we should research political violence more generally.' -- James Hughes, London School of Economics, UK

'So much of the politics of the Middle East in general and Israel/Palestine in particular have long been bedevilled by constant streams of myths and propaganda. Richard Davis in this excellent book has dispelled many of those myths and exposed the worst of the propaganda. He has achieved it in an impressively dispassionate, objective and well researched way. If the first victim of war is truth, so it is the constant casualty of insurgency and civil strife. By shining bright light into frequently darkened areas Richard Davis has performed an important service for those who seek peace in the Middle East.' -- Michael Lothian, Chairman Global Strategy Forum and fmr. Shadow Foreign Secretary, UK

'This book contributes significantly to the social science and broader study of terrorist group dynamics and decision-making.  It is also an important narration of Hamas’ historical evolution.  For those interested in the history of Hamas and its connections to episodes of violence and the broader context of conflict with Israel, this book is an indispensable source.'-- From the Foreword by The Honorable Juan C. Zarate, former Deputy Assistant to the President and Deputy National Security Advisor for Combating Terrorism; first-ever Assistant Secretary of the Treasury for Terrorist Financing and Financial Crimes, USA

'Rich Davis, a former White House and Homeland Security policymaker with a doctorate from the London School of Economics, has a mission of faith: to understand radicalization by armed groups and host populations in as scientifically sober a way as possible, so that by this knowledge we may see clearer how to lessen the group violence that is ripping apart the Middle East and rendering peace more fragile everywhere. His highly readable case study is carefully chosen: the relation between Hamas policies and popular sentiment in the Israel-Palestine conflict, arguably the world’s symbolic knot. The framework of his study is what the great German sociologist Max Weber called "The Vocation of Politics": how political groups seek to balance the responsibilities of governance with the need to stay true to their ideals and thus maintain legitimacy. Through careful, cutting-edge statistical analysis of 22 years of survey data and reports on violent actions from very reliable Palestinian and Israeli sources, and from first-hand interviews with leaders from Hamas and Israel as well with military and intelligence officers and families of suicide bombers, Dr. Davis comes to a compelling conclusion: that Hamas – and likely other important radical, insurgent and revolutionary groups – endure because they learn to ride the tides of popular will. If so, then we must endeavor to understand why the people want such groups before we try to degrade or destroy them and, in our ignorance, favor resurgence towards something worse.' -- Scott Atran, Research Director, France’s National Center for Scientific Research & Research Professor at the University of Michigan, USA