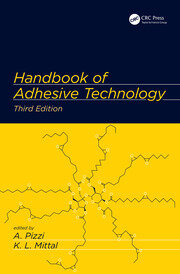 A.Pizzi, is full professor of industrial chemistry at the ENSTIB, University of Lorraine. Prof. Pizzi, who holds a Dr.Chem. (Polymers, Rome, Italy), a Ph.D.(Organic Chemistry, South Africa) and a D.Sc.(Wood Chemistry, South Africa), is the author of more than 700 research and technical articles, patents, contract reports and international conference papers as well as 7 books on adhesion and adhesives published in New York, and is the recipient of numerous international prizes for new industrial developments in his fields of specialization.. His best-known area of specialization is on wood and fiber glueing and wood adhesives chemistry, formulation and application, in particular to composite products based on natural materials.

K.L. Mittal obtained his Ph.D. from the University of Southern California in 1970 and was associated with IBM Corp. from 1972 to 1994. He is currently teaching and consulting worldwide in the areas of adhesion and surface cleaning. He is the editor of 112 published books, as well as others that are in the process of publication, within the realms of surface and colloid science and of adhesion. He has received many awards and honors and is listed in many biographical reference works. Mittal was a founding editor of the Journal of Adhesion Science and Technology and was its editor-in-chief until April 2012. He has served on the editorial boards of a number of scientific and technical journals. He was recognized for his contributions and accomplishments by the international adhesion com- munity that organized the First International Congress on Adhesion Science and Technology in Amsterdam in 1995 on the occasion of his 50th birthday (235 papers from 38 countries were presented). In 2002, he was honored by the global surfactant community, which instituted the Kash Mittal Award in the surfactant field in his honor. In 2003 he was honored by the Maria Curie-Sklodowska University, Lublin, Poland, which awarded him the title of doctor honoris causa. In 2010, he was honored by both adhesion and surfactant communities on the occasion of publication of his 100th edited book. More recently, he initiated a new journal titled Reviews of Adhesion and Adhesives.