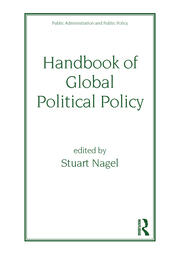 The latest in the six-volume set of global policy handbooks, the Handbook of Global Political Policy utilizes a cross-national, cross-policy approach to examine the public policy of six different regions around the world. Combining actual and theoretical perspectives, this expansive reference compares and presents nonideological resolutions to curr

Political policy - an introduction; majority rule and stability - where do we stand now? growing inequalities and dangers to democracy in hypermodern society - some policy implications; democratisation in a comparative perspective; democratisation in federal systems -integration or disintegration? theories of democratisation and the case of donor-assisted democratisation in Namibia; evaluation of intergovernmental relationships in South Africa with specific reference to local authorities; African political reform and international assistance; what can and should be done? elections and the democratic project in Africa - precepts, practices, and the future; new dimensions in administrative reform in Japan; regional voting in new democracies; the case of South Korea from a comparative perspective; the military and democracy in China; leadership conceptions of local elites - across the Taiwan Strait - a cultural analysis; interest groups in the Philippines after the 1986 People's Power Revolt; development and the issue of governance in south Asia - alternative strategies; role of performance of Indian Parliament in the process of democratisation - a case study of Panchayati Raj system; electoral systems in Pacific and other smaller islands; political culture and politicised culture? comparing democracies in south and south-east Asia; formation of the new Russian political elite; effects of post-communist modernisation I Russia in a comparative perspective; explaining ideological swings in western democracies - a comparative analysis, 1952-1989; party systems and elites in post-communist Europe; dissolution of the Czechoslovak and Yugoslav federations - a lose-lose policy outcome? post-communist Russia as a challenge to transition theories; legislative agenda setting in east central Europe -what makes a difference? Carlos Menem and the reshaping of Argentine history. (Part contents).

The latest in the six-volume set of global policy handbooks, the Handbook of Glob