Handbook of Nanophysics
Nanotubes and Nanowires 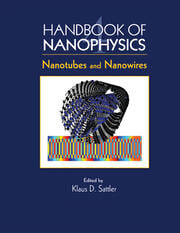 Handbook of Nanophysics: Nanotubes and Nanowires

Intensive research on fullerenes, nanoparticles, and quantum dots in the 1990s led to interest in nanotubes and nanowires in subsequent years. Handbook of Nanophysics: Nanotubes and Nanowires focuses on the fundamental physics and latest applications of these important nanoscale materials and structures. Each peer-reviewed chapter contains a broad-based introduction and enhances understanding of the state-of-the-art scientific content through fundamental equations and illustrations, some in color.

Nanophysics brings together multiple disciplines to determine the structural, electronic, optical, and thermal behavior of nanomaterials; electrical and thermal conductivity; the forces between nanoscale objects; and the transition between classical and quantum behavior. Facilitating communication across many disciplines, this landmark publication encourages scientists with disparate interests to collaborate on interdisciplinary projects and incorporate the theory and methodology of other areas into their work.

Klaus D. Sattler is a professor of physics at the University of Hawaii-Manoa in Honolulu. A pioneer in nanophysics, Dr. Sattler built the first atomic cluster source in 1980, which became a cornerstone for nanoscience and nanotechnology. In 1994, his research group at the University of Hawaii produced the first carbon nanocones. His current research focuses on novel nanomaterials, tunneling spectroscopy of quantum dots, and solar photocatalysis with nanoparticles for the purification of water. Dr. Sattler has been a recipient of the Walter Schottky Prize from the German Physical Society