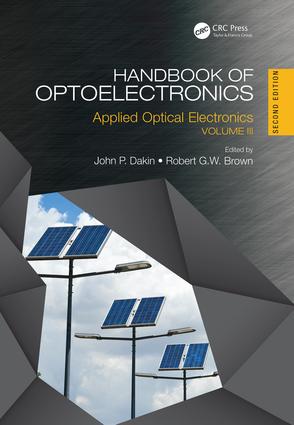 Handbook of Optoelectronics offers a self-contained reference from the basic science and light sources to devices and modern applications across the entire spectrum of disciplines utilizing optoelectronic technologies. This second edition gives a complete update of the original work with a focus on systems and applications.

No other resource in the field comes close to its breadth and depth, with contributions from leading industrial and academic institutions around the world. Whether used as a reference, research tool, or broad-based introduction to the field, the Handbookoffers everything you need to get started.

Robert G. W. Brown, PhD, is chief executive officer of the American Institute of Physics and an adjunct full professor in the Beckman Laser Institute and Medical Clinic at the University of California, Irvine.

Part I: Optoelectronics in Infrastructure

Optoelectronics for Control of City Transport

Applications of Distributed Acoustic Sensing (DAS) for Security and Surveillance

Satellite Observation of the Oceans

Fibre Optics in the Oil Industry

John P. Dakin, PhD, is Professor (Emeritus) at the Optoelectronics Research Centre, University of Southampton. He received the B.Sc. and Ph.D. degrees from Southampton University, U.K., and remained there as a Research Fellow until 1973 where he supervised research and development of optical fiber sensors and other optical measurement instruments. He then spent two years in Germany at AEG Telefunken, 12 years at Plessey, UK, and two years with York Limited/York Biodynamics before returning to Southampton University. He has authored over 150 technical and scientific papers, and over 120 patent applications. He was previously a Visiting Professor at Strathclyde University, UK.

Dr. Dakin has won a number of awards, including "Inventor of the Year" for Plessey Electronic Systems Limited, the Electronics Divisional Board Premium of 1EE. Earlier, he won open scholarships to both Southampton and Manchester Universities. He has also been responsible for a number of key electro-optic developments. These include the sphere lens optical fiber connector, the first WDM optical shaft encoder, the Raman optical fiber distributed temperature sensor, the first realization of a fiber-optic passive hydrophone array sensor and the Sagnac location method described here, plus a number of novel optical gas sensing methods.

is chief executive officer of the American Institute of Physics.

He received his PhD in engineering from the University of Surrey and his BS in physics from Royal Holloway College at the University of London. He was previously an applied physicist at Rockwell Collins, where he carried out research in photonic ultra-fast computing, optical detectors, and optical materials. Previously, he was an advisor to the UK government, and international and editorial director of the Institute of Physics. He is an elected member of the European Academy of the Sciences and Arts (Academia Europaea) and special professor at the University of Nottingham in the UK. He also retains a position as adjunct full professor at the University of California, Irvine, in the Beckman Laser Institute and Medical Clinic, and as visiting professor in the Department of Computer Science. He has authored more than 120 articles in peer-reviewed journals and holds 34 patents, several of which have been successfully commercialized.

Dr. Brown has been recognized for his entrepreneurship with the UK Ministry of Defence Prize for Outstanding Technology Transfer, a prize from Sharp Corporation (Japan) for his novel laser-diode invention, and, together with his team at the UK Institute of Physics, a Queen’s Award for Enterprise, the highest honor bestowed on a UK company. He has guest edited several special issues of Applied Physics, and was consultant to many companies and government research centers in the USA and UK. He is a Series Editor of the CRC Press Series in Optics and Optoelectronics.

Series in Optics and Optoelectronics