Handbook of Solid-State Lighting and LEDs 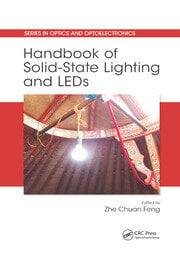 Handbook of Solid-State Lighting and LEDs

This handbook addresses the development of energy-efficient, environmentally friendly solid-state light sources, in particular semiconductor light emitting diodes (LEDs) and other solid-state lighting devices. It reflects the vast growth of this field and impacts in diverse industries, from lighting to communications, biotechnology, imaging, and medicine. The chapters include coverage of nanoscale processing, fabrication of LEDs, light diodes, photodetectors and nanodevices, characterization techniques, application, and recent advances. Readers will obtain an understanding of the key properties of solid-state lighting and LED devices, an overview of current technologies, and appreciation for the challenges remaining. The handbook will be useful to material growers and evaluators, device design and processing engineers, newcomers, students, and professionals in the field.

Prof. Zhe Chuan Feng earned his Ph.D. in condensed matter physics from the University of Pittsburgh in 1987. Previously he received his B.S. (1962-68) and M.S. degrees (1978-81) from the Department of Physics at Peking University. He has had positions at Emory University (1988-1992), National University of Singapore (1992-1994), Georgia Tech (1995), EMCORE Corporation (1995-1997), Institute of Materials Research & Engineering, Singapore (1998-2001), Axcel Photonics (2001-2002) and Georgia Tech (2002-2003). In 2003, Prof. Feng joined National Taiwan University as a professor at the Graduate Institute of Photonics & Optoelectronics and Department of Electrical Engineering, focusing on materials research and MOCVD growth of LED, III-Nitrides, SiC, ZnO and other semiconductors/oxides. He is currently distinguished professor at the Laboratory of Optoelectronic Materials and Detection Technology, Guangxi Key Laboratory for Relativistic Astrophysics in the School of Physical Science and Technology at Guangxi University, Nanning, China.

Prof. Feng has edited nine review books on compound semiconductors and microstructures, porous Si, SiC and III-Nitrides, ZnO, devices and nanoengineering, and has authored or co-authored over 570 scientific papers with over 220 indexed by the Science Citation Index (SCI) and cited over 2,540 times. He has been symposium organizer and invited speaker at different international conferences and universities, and has been a reviewer for several international journals including Physics Review Letters, Physics Review B and Applied Physics Letters. He has served as guest editor for special journal issues, and has been a visiting or guest professor at Sichuan University, Nanjing Tech University, South China Normal University, Huazhong University of Science & Technology, Nankai University and Tianjin Normal University. He is a member of the international organizing committee for the Asian-Pacific Confe