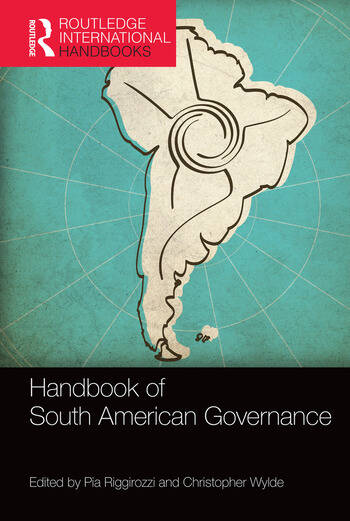 Governance in South America is signified by strategies pursued by state and non-state actors directed to enhancing (some aspect of) their capabilities and powers of agency. It is about the spaces and the practices available, demanded or created to ‘make politics happen’. This framework lends explanatory power to understand how governance has been defined and practiced in South America.

This Handbook will be a key reference for those concerned with the study of South America, South American political economy, regional governance, and the politics of development.

Part I Governance and Development in South America

Part II The Institutionalization of Governance in South America

8 Governing security in South America: from the Inter-American Treaty of Reciprocal Assistance to the South American Defence Council Jorge Battaglino

9 The Organization of American States: Promise and limitations as a hub institution Andrew F. Cooper

12 Governance as regional integration: ALADI, CAN and MERCOSUR Laura Gómez-Mera

17 The place of the military in South American governance Orlando J. Pérez

18 Beyond states and markets in South America: Lessons of labour-centred development from Chile and Argentina Adam Fishwick and Benjamin Selwyn

19 A foot on each side of the picket-line: the contradictory role of labour unions in South American governance Daniel Ozarow

21 Democracy, pluralism and the media in South America Carolina Matos

25 Shaking up governance and inequality in South America: a political-economy account Jeff Dayton-Johnson

33 Scaling up citizenship in South America through MERCOSUR Marcelo Mondelli

34 Institutions, actors and the practice of governance in South America: Conclusion and directions for further research Pia Riggirozzi and Christopher Wylde