Handbook of the Economics and Political Economy of Transition 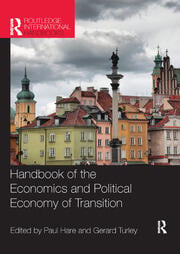 Handbook of the Economics and Political Economy of Transition

Transition from central planning to a market economy, involving large-scale institutional change and reforms at all levels, is often described as the greatest social science experiment in modern times. As more than two decades have passed since the fall of the Berlin Wall and the collapse of the Soviet Union, it is now an excellent time to take stock of how the transition process has turned out for the economies that have moved on from socialism and the command economy.

This new handbook assembles a team of leading experts, many of whom were closely involved in the transition process as policymakers and policy advisors, to explore the major themes that have characterized the transition process. After identifying the nature of initial conditions and the strengths and weaknesses of institutions, the varying paths and reforms countries have taken are fully analyzed – from the shock therapy, privatization or gradualism of the early years to the burning issues of the present including global integration and sustainable growth.

Topics covered include the socialist system pre-transition, economic reforms, institutions, the political economy of transition, performance and growth, enterprise restructuring, and people and transition. The country coverage is also extensive, from the former socialist countries of the USSR and the satellite states of Central and Eastern Europe to the Asian countries of China, Vietnam and others. The rise of China as a key actor in the drama is chronicled, along with the emergence of a new, more confident, oil-rich Russia. The comparative prosperity of the Central European countries such as Poland and the Czech Republic is contrasted with the mixed fortunes of the former USSR, where some countries are stagnating while others boom.

This Handbook of the Economics and Political Economy of Transition is the definitive guide to this new order of things in the former Communist world.

Paul Hare has been Professor of Economics at Heriot-Watt University, Edinburgh, since 1985 and has worked on Eastern Europe and the former Soviet Union since the early 1970s. At Heriot-Watt University he established the Centre for Economic Reform and Transformation in 1990 and this rapidly became a leading centre for research on the transition economies. Professor Hare has had many research grants and consultancy contracts, including with all the leading international financial institutions, and has published widely on transition and other topics. He is the author of Vodka and Pickled Cabbage: The Eastern European Travels of a Professional Economist, which was published in 2010.

is at the J.E. Cairnes School of Business and Economics at the National University of Ireland, Galway. Formerly he was a Research Associate at the Centre for Economic Reform and Transformation, Edinburgh. He has worked on various transition-related projects funded by the EBRD, UK Department for International Development (DFID) and EC EuropeAid. He is the author of Transition, Taxation and the State (2006) and co-author of Transition Economics: Two Decades On (2010). He has taught in universities in Eastern Europe, Russia and Central Asia, and also in the United States at the University of California, Berkeley.