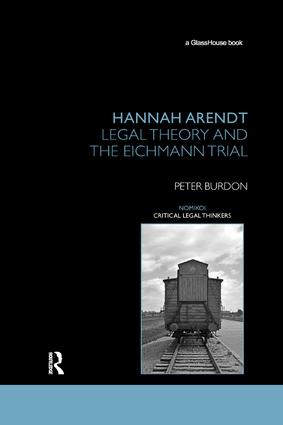 Hannah Arendt is one of the great outsiders of twentieth-century political philosophy. After reporting on the trial of Nazi war criminal Adolf Eichmann, Arendt embarked on a series of reflections about how to make judgments and exercise responsibility without recourse to existing law, especially when existing law is judged as immoral. This book uses Hannah Arendt’s text Eichmann in Jerusalem to examine major themes in legal theory, including the nature of law, legal authority, the duty of citizens, the nexus between morality and law and political action.

2 The House of Judgment

5 From expulsion to extermination

7 Duties of a law-abiding citizen

9 Did Eichmann receive a fair trial?

12 The last Nazi trials and forgiveness

Peter Burdon is Associate Professor and Reader at the Adelaide Law School, The University of Adelaide, Australia.