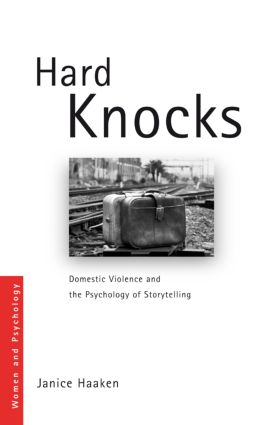 Domestic Violence and the Psychology of Storytelling, 1st Edition

This book draws on interviews carried out over a period of eight years, as well as novels, films, and domestic violence literature, to explain the role of storytelling in the history of the battered women’s movement. The author shows how cultural contexts shape how stories about domestic abuse get told, and offers critical tools for bringing psychology into discussions of group dynamics in the domestic violence field.

The book enlists psychoanalytic-feminist theory to analyse storytelling practices and to re-visit four areas of tension in the movement where signs of battle fatigue have been most acute. These areas include the conflicts that emerge between the battered women’s movement and the state, the complex relationship between domestic violence and other social problems, and the question of whether woman battering is a special case that differs from other forms of social violence. The volume also looks at the tensions between groups of women within the movement, and how to address differences based on race, class or other dimensions of power. Finally, the book explores the contentious issue of how to acknowledge forms of female aggression while still preserving a gender analysis of intimate partner violence.

In attending to narrative dynamics in the history of domestic violence work, Hard Knocks presents a radical re-reading of the contribution of psychology to feminist interventions and activism. The book is ideal reading for scholars, activists, advocates and policy planners involved in domestic violence, and is suitable for students of psychology, social work, sociology and criminology.

“The mid-20th century feminist movement was the catalyst for the most recent domestic violence reform efforts in the United States. In the forty years since then feminist advocates have shaped perceptions, policies, and laws. This book tells and analyzes their stories. While Haaken relies on a broad range of sources she structures the book primarily around conversations with domestic violence advocates in the United States and overseas to show how broader historical and cultural forces shape activists’ perceptions of domestic violence reform. The reader is treated to a wide-ranging and stimulating treatise on what would otherwise be yet another re-telling of policy changes and the successes and failures linked to their implementation. Using a multi-layered conceptual framework that enlists the social psychology of story telling, psychoanalysis, and several feminist perspectives, Haaken’s book lays bare themes of unity and strife in three distinct stories told by advocates – stories of captivity, stories of deliverance, and stories of struggle and reparation. … Hard Knocks: Domestic Violence and the Psychology of Storytelling is an enlightened and forward looking assessment of domestic violence reform. Students, practitioners, and social scientists with some familiarity of the topic will value the author’s insightful and timely analysis.” - Annette Jolin, Professor Emerita, Criminology and Criminal Justice, Portland State University, USA, in Criminal Justice Review

"Haaken’s material is rich and unusual, and her analyses of how group dynamics in the battered women’s movement are intertwined with diverse story-telling practices are fascinating. The international comparisons raise further food for thought. … The book would be a useful resource for teaching students about the historical context of activism against domestic violence, and in particular for illustrating how particular forms of story-telling become possible within specific historical contexts and how story-telling about the ‘same issue’ (domestic violence) may therefore differ between different countries and over time." - Renate Klein in Sex Roles

"The book is a rich and authoritative resource about both the history and current status of the feminist antiviolence movement. It will be a good text book in women’s studies programs." - Paul T.P. Wong in PsycCRITIQUES

"Haaken’s penetrating historical critique of the domestic violence movement comes as a welcome breath of fresh air – opening up new avenues for reinvigorated feminist analysis and activism. … [Haaken’s] analytical ability to hold complexity within one analytical frame provides feminist psychologists with an exemplary case study of the types of dialectical thought and action that need to be promoted. This book serves as a much-needed roadmap of the contours of new and more transformative approaches to domestic violence." - Catherine Campbell, London School of Economics, in The Community Psychologist

"In an accessible, direct and compelling manner, this impressively scholarly text surveys the full array of recent debates tackling the complexities of gender and violence. Janice Haaken’s voice has become pivotal in the rethinking of domestic violence literature and research, ensuring that this book will become an essential text across the social sciences in all areas where gender is discussed." - Lynne Segal, Psychosocial Studies, Birkbeck College, University of London, UK

"This book is pioneering and courageous, employing psychoanalytic concepts to subvert those aspects of (white) feminist activist orthodoxy on domestic violence. The power of storytelling in shaping and transforming women’s lives is evoked with reparative narratives which are explored to exhilarating effect."- Paula Nicolson, Professor of Critical Social Health Psychology, Royal Holloway, University of London, UK

"Janice Haaken—feminist researcher, clinician, and activist—grips us with her analysis of the stories we tell ourselves about family violence. Whether probing the complexities of victim narratives or examining the different ways feminists and activists narrate domestic violence, Haaken is a pioneer in extending psychoanalytic-feminist theory into the tough terrain of anti-violence politics. Essential reading for activists and gender studies theorists alike." - Lynne Layton, Assistant Clinical Professor of Psychology, Harvard Medical School, USA

Introduction. 1. Hard Ground: From Solitary Suffering to Sisterhood. 2. Between a Rock and a Hard Place: Feminist Psychology and the Politics of Violence. 3. Damsels in Distress: Popular Culture and Stories of Domestic Abuse. 4. Going Underground: Feminism and Shelter Practices. 5. Between the Devil and the Deep: Intervening with Batterers. 6. Running on Empty: Women, Children, and Strategies of Survival. 7. Conclusions: Beyond Survival.

Janice Haaken is a Professor of Psychology at Portland State University. She is also a clinical and community psychologist, documentary filmmaker and social justice activist. An interdisciplinary scholar, Haaken has published extensively in the areas of psychoanalysis and feminism, gender and the history of psychiatric diagnosis, group responses to violence and trauma, and the psychology of storytelling.

This series brings together current theory and research on women and psychology. Drawing on scholarship from a number of different areas of psychology, it bridges the gap between abstract research and the reality of women's lives by integrating theory and practice, research and policy.

Each book addresses a 'cutting edge' issue of research, covering topics such as postnatal depression and eating disorders, and addressing a wide range of theories and methodologies.

The series provides accessible and concise accounts of key issues in the study of women and psychology, and clearly demonstrates the centrality of psychology debates within women's studies or feminism.