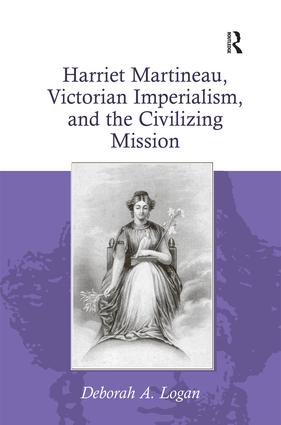 By Deborah A. Logan

In her in-depth study of Harriet Martineau's writings on the evolution of the British Empire in the nineteenth century, Deborah A. Logan elaborates the ways in which Martineau's works reflect Victorian concerns about radically shifting social ideologies. To understand Martineau's interventions into the Empire Question, Logan argues, is to recognize her authority as an insightful political commentator, historian, economist, and sociologist whose eclectic studies and intellectual curiosity positioned her as a shrewd observer and recorder of the imperial enterprise. Logan's primary sources are Martineau's nonfiction works, particularly those published in periodicals, complemented by telling references from Martineau's didactic fiction, correspondence, and autobiography. Key texts include History of The Peace; Letters from Ireland and Endowed Schools of Ireland; Illustrations of Political Economy; Eastern Life, Present and Past; and History of British Rule in India and Suggestions for the Future Rule of India. Logan shows Martineau negotiating the inevitable conflict that arises when the practices of Victorian imperialism are measured against its own stated principles, and especially against Martineau's idea of both the Civilizing Mission and the indigenous cultural integrity often compromised in the process. The picture of Martineau that emerges is complex and fascinating. Both an advocate and a critic of British imperialism, Martineau was a persistent champion of the Civilizing Mission. Written with an awareness that she was recording contemporary history for future generations, Martineau’s commentary on this perpetually fascinating, often tragic, and always instructive chapter in British and world history offers important insights that enhance and complicate our understanding of imperialism and globalization.

'Superbly written and breathtaking in its scope and coverage, Deborah A. Logan's study is a fair and evenhanded treatment of Harriet Martineau's writings on empire.' Maria Frawley, George Washington University, USA 'As a guide to an important writer's thinking and writing on imperialism and its relation to a "civilizing mission," Logan's work is invaluable. She maps the historically specific construction (and interplay) of racist, nonracist, imperialist, and progressive thinking through the vastness of Martineau's oeuvre with frankness and clarity. … I applaud Logan's insistence on looking at these racist and gender stereotypes up close, to investigate their operations and range, and her refusal to be satisfied with labels.' Journal of British Studies 'Logan approaches her newest work with a clear and intimate knowledge of her subject… It is with extreme care and affection that she describes Martineau’s character, background and ambitions and her prose is filled and formed by a continuing sense of exceptionality.' Britain and the World

Deborah A. Logan is professor of English at Western Kentucky University, where she teaches Victorian Literature and Culture. She is editor of The Victorian Newsletter.