Harvest of a Decade
Disraelia and Other Essays 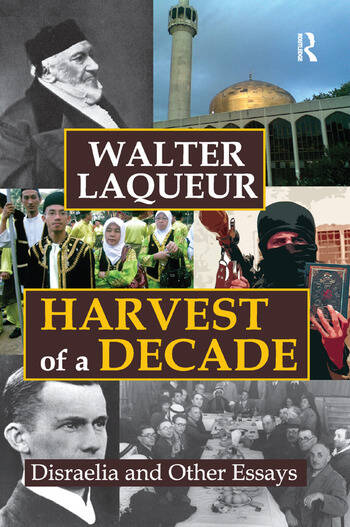 Harvest of a Decade: Disraelia and Other Essays

This is a selection of essays written during the first decade of the twenty-first century, by a figure widely acknowledged as the conscience of European liberalism. In Walter Laqueur's lifetime, there have been more acutely dangerous situations, such as the coming of a world war or the seemingly unstoppable march to victory of totalitarian regimes, than in any other previous epoch. Such immediate dangers may not exist at the present time. But long-term trends are equally or even more threatening, as we now see in the ability of small groups of people, unprecedented in history, to inflict enormous damage. This is the underlying essence of Laqueur's thinking, as expressed in this new volume.

As Laqueur observes, one learns from long experience that the worst does not always happen, and if it does, probably not in one's lifetime. Ideas and intellectual fashions emerging from the groves of academe, particularly in America can seem wrongheaded and often out of touch with the real world. This growing isolation causes growing bitterness, alienation, and a feeling of impotence on the part of intellectuals, which turns into greater radicalization and farfetched thinking. Laqueur fortunately does not fall into this trap.

The articles and essays selected for this volume deal with a variety of topics. They do not entirely reflect Laqueur's interests, which during this period were more in the cultural field than in politics. However, politics intrude irrespective of the author's predilections. Laqueur deals with unpleasant truths in concrete geopolitical settings, but poignantly takes his stand with the men and women who strive to overcome self-censorship in the search for accurate judgment.