Heads of the Local State
Mayors, Provosts and Burgomasters since 1800 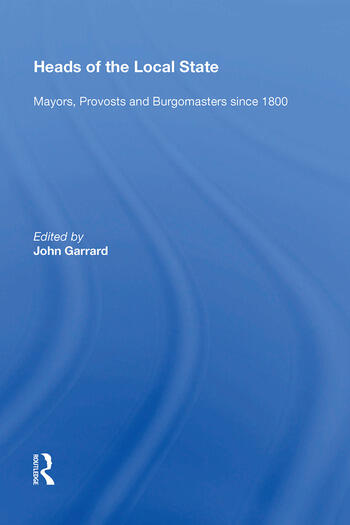 Heads of the Local State: Mayors, Provosts and Burgomasters since 1800

In recent decades there has been increasing historical interest in various aspects of local urban politics, resulting in a much better understanding of the recruitment and socio-economic characteristics of municipal leadership and the exercise of power at a local level. However, much less is known about the highly important offices and office-holders standing at the ceremonial, political and executive head of towns and cities. Through a comparative analysis of mayoralty since1800, this volume explores the characteristics of the office in relation to such issues as the constitutional position of mayors, their ceremonial and executive roles, their representational status in relation to local, regional and central authority, and their public visibility, which at various times has been used to highlight or blur issues of race, gender, politics or religion within a community. Drawing on examples from contrasting national contexts in Eastern and Western Europe, and North America, and with contributions from both historians and political scientists, this book will be welcomed as an important step in providing a much fuller international picture of the development and nature of urban governance.

Contents: Introduction; English mayors: what are they for?, John Garrard; The Scottish provost since 1800: tradition, continuity and change in the leadership of 'local self-government', Irene Maver; Symbolism or substance? The mayoralty in Northern Ireland, Colin Knox; The mayoralty in the Republic of Ireland, Muiris MacCarthaigh and Mark Callanan; The end of French mayors?, Olivier Borraz and Emmanuel N ier; The impact of the German occupation (1940-1944) on the Belgian and Dutch mayoralty, Nico Wouters; Servants of the state, agents of the party, representatives of the people: the German mayoralty in the 20th century, Anthony McElligott; The mayoralty in Italy, James L. Newell; From party and state domination to Putin's 'power vertical': the subjugation of mayors in Communist and post-Communist Russia, Cameron Ross; The mayor in American local government, Benjamin A. Lloyd, Donald F. Norris and Thomas J. Vicino; Index.