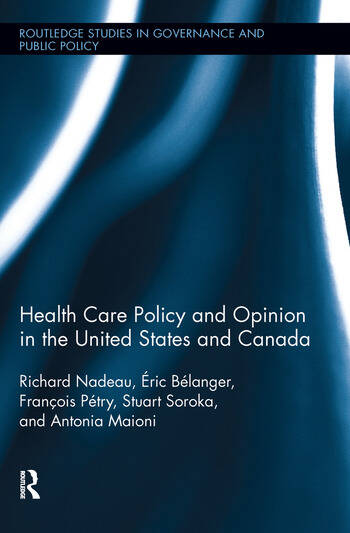 Heated debate surrounds the topic of health care in both the US and in Canada. In each country, these debates are based in some measure on perceptions about health care in their neighboring country. The perceptions held by Canadians about the US health care system, or those held by Americans about Canada, end up having significant impact on health policy makers in both countries.

The authors present how perceptions on health care indicate elements of convergence or divergence between the views of Canadians and Americans, and discuss how these citizen opinions should inform health care policy change in both countries in the near future. This book should generate interest in scholars of health care, public opinion, and comparative studies of social policies and public opinion.

is Associate Professor of Political Science at McGill University. His research interests include political parties, public opinion and voting behavior. His work has been published in several scholarly journals including Comparative Political Studies, Political Research Quarterly, Electoral Studies, and the European Journal of Political Research. He is also the co-author of French Presidential Elections and Le comportement électoral des Québécois.

is Professor and Chair of Political Science at Laval University. His main areas of interest are public policy, public opinion, comparative politics, and research methodology. He has published widely about the links between government policies and the preferences of citizens, as well as the use of polls in health care policy and election campaigning.

is Professor of Communication Studies and Faculty Associate at the Center for Political Studies, University of Michigan. His research focuses on political communication, the sources and/or structure of public preferences for policy, and on the relationships between public policy, public opinion, and mass media. He is the author, among other work, of Negativity in Democratic Politics and Agenda-Setting Dynamics in Canada.

is Professor at McGill University in the Department of Political Science and the Institute for Health and Social Policy. From 2001 to 2011, she served as director of the McGill Institute for the Study of Canada, while also holding the position of William Dawson Scholar. She has published widely in the fields of comparative politics, public policy and health care reform.

"A welcome work of public opinion scholarship comparing what North Americans--on both sides of the Canadian/US border --think about their health care, their nation's programs, and what their neighbors have and do not have. This sharply contrasts with the mix of mischief and sheer mythology that prevails in much public debate. " Ted Marmor, Yale University and co-author of Politics, Health, and Health Care, (with Rudolf Klein) , Yale UP 2012

"A fascinating, timely, and pioneering comparison of American and Canadian public opinion toward health policy.  The authors use unique comparative survey data to explain how two broadly similar countries diverge in their views on health policy.  Opponents of each country’s system work overtime to frame flaws with a striking difference: most Canadians favor their system while many Americans welcome reform closer to the Canadian single payer model."