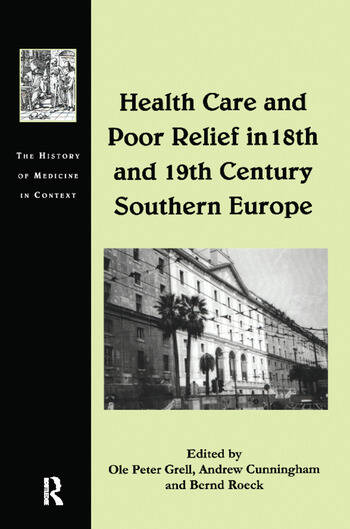 The poor and the sick-poor have always presented a problem to the governments and churches of Europe. Whose responsibility are they? Are they a wilful burden on the honest working population, or are they a necessary presence for the true Christian to live the true Christian life? In the 18th and 19th centuries what happened to the poor and the sick-poor in the north and south of Europe was different. In the north there occurred first the Reformation in the 16th century, which changed attitudes to the poor, and then the advent of industrialisation, with its far-reaching effects of pauperisation of people both in town and countryside. In the Catholic south, where industrialisation did not appear so soon, the Catholic Church introduced a programme of reform at all levels but along traditional lines. This included the founding of new orders dedicated to the care of the poor and sick, of new institutions within which to house and care for them. At all times it was taken for granted that it was a necessary aspect of being a Christian that one should give for the care of the needy, and that this was not the duty of the state or of secular institutions. The secularising movement did however reach the southern countries by way both of the Enlightenment and - more drastically - in the form of the Napoleonic invasions. But after the defeat of Napoleon, the Church reasserted its right to administer and control the support of the poor and sick, and this situation continued until 1900 in most areas. Moreover the effects of industrialisation and the concomitant increase in population did make itself felt in the south in the course of the 19th century, which put great stress on the institutions for poor relief and health care for the poor. All this is still relevant today, since the situations that governments and the Catholic Church found themselves confronted with, and the stark choices they had to make, are being replayed to some extent today. Who is responsible for the poor, who is to blame for their being poor? How should their poverty be relieved, how should the health care of the many be funded? These are still live issues today. While complete in itself the present volume also forms the fourth and last of a four-volume survey of health care and poor relief in Europe between 1500 and 1900, edited by Ole Peter Grell and Andrew Cunningham