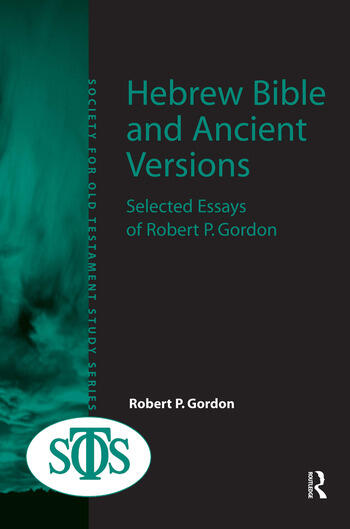 Robert Gordon gathers together his most important essays on the Old Testament and on the ancient versions, adding an introduction which gives background comment and reflections on each essay. The Old Testament essays are divided into three groups: The Narrative Tradition', 'Prophecy from East to West', and 'Across, Behind and Beyond the Text'. The essays on the ancient versions are divided into two sections: 'The Text and the Versions' and 'The Targums, Chiefly to the Prophets'.

Contents: Preface; Introduction. I Hebrew Bible: The Narrative Tradition: David's rise and Saul's demise: narrative analogy in 1 Samuel 24-26; Simplicity of the highest cunning: narrative art in the Old Testament; Word-play and verse-order in 1 Samuel xxiv 5-8; Covenant and apology in 2 Samuel 3; Compositeness, conflation and the Pentateuch; Who made the Kingmaker? Reflections on Samuel and the institution of the monarchy; A house divided: wisdom in Old Testament narrative traditions; Gibeonite ruse and Israelite curse in Joshua 9. Prophecy from East to West: A story of two paradigm shifts; From Mari to Moses: prophecy at Mari and in ancient Israel; Where have all the prophets gone? The 'disappearing Israelite prophet against the background of ancient near eastern prophecy; Present trends and future directions. Across, Behind and Beyond the Text: The ideological foe: the Philistines in the Old Testament; A warranted version of historical biblical criticism?: a response to Alvin Plantinga; 'Comparativism' and the God of Israel; Better promises: two passages in Hebrew against the background of the Old Testament cultus. II Ancient Version: The Text and the Versions: The second Septuagint account of Jeroboam: history or midrash?; Source study in 1 Kings XII 24a-n; The variable wisdom of Abel: the MT and versions at 2 Samuel xx 18-19; The Syriac Old Testament: provenance, perspective and translation technique; 'Converse translation' in the Targums and beyond; The legacy of Lowth: Robert Lowth and the book of Isaiah in particular. The Targums, Chiefly to the Prophets: Alexander Sperber and the study of the Targums; The Targumists as Eschatologists; Terra Sancta and the territorial doctrine of the Targum to the prophets; Dialogue and disputation in the Targum to the prophets; The Ephraimite Messiah and the Targums(s) to Zechariah 12.10. Indexes.

Robert P. Gordon is Regius Professor of Hebrew at the University of Cambridge, UK.

'Robert P. Gordon, renowned Cambridge Hebraist has, for many years, deepened our understanding of the Targums and other key versions of the Hebrew Bible. Lesser known, to some, have been his several fundamental contributions to prophetical and historical studies, as well as to the literary techniques of Hebrew prose composition. In his collection of carefully documented essays, Professor Gordon has generously made a selection of all of his shorter works available to us. This well-written and useful volume will be of interest not only to scholars, but also to a pre- and post doctoral audience'. Hans M. Barstad, University of Oslo 'The writings of Robert Gordon are wide ranging, engaging, and distinctively helpful. The same can be said of the effect that he has had on a steady stream of doctoral students, now scattered across the globe. All who know the man and his work will be delighted with this convenient collection of his shorter writings. As a writer, Gordon has the rare ability to combine specialist precision with elegant readability, and those yet to read his work are in for a feast that will both delight and fortify.' V.Philips Long, Regent College, Vancouver 'These contributions of Robert Gordon are marked by lucid and illuminating observations, opening up new territory and wide vistas, especially in the field of Targum studies'. Arie van der Kooij, Leiden University 'As an expert of ancient versions, Robert Gordon handles his sources in their original language with ease, relating them to questions modern readers have. His works on the extremely textually difficult Books of Samuel are among the finest examples of recent scholarly achievements, from which every Bible scholar should learn.' David T. Tsumura, Japan Bible Seminary ’... 28 informative and insightful essays that are well worth reprinting and rereading... The volume represents a brilliant sample of Gordon's scholarly contribution to the field of Old Testament study...’ Journal for the