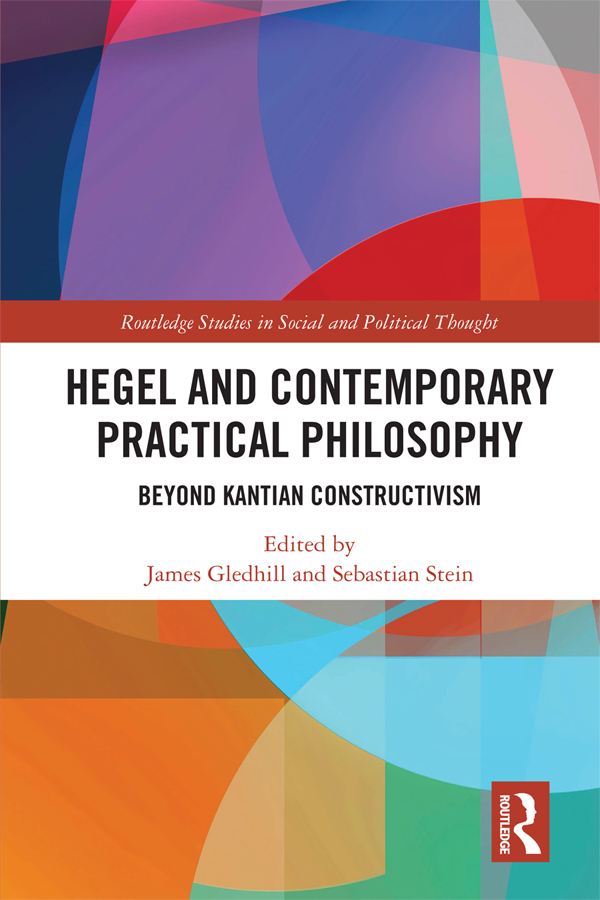 While Kantian constructivism has become one of the most influential and systematic schools of thought in analytic moral and political philosophy, Hegelian approaches to practical normativity hold out the promise of building upon Kantian insights into individual self-determination while avoiding their dualistic tendencies. James Gledhill and Sebastian Stein unite distinguished scholars of German idealism and contemporary Anglophone practical philosophy with rising stars in the field, to explore whether Hegelian idealist philosophy can offer the categories that analytic practical philosophy requires to overcome the contradictions that have so far plagued Kantian constructivism.

The volume organizes the contributions into three parts. The first of these engages debates in metaethics regarding the relationship between realism and constructivism. The second part sees contributors draw on debates about the nature of political normativity, focusing primarily on the problems of historical contextualism, relativism and critical reflection. The concluding part considers the application of the Hegelian framework to contemporary debates about specific ethical issues, including multiculturalism, democracy and human rights.

"Beyond Kantian Constructivism is the first attempt to put recent interpretations of Hegel into dialogue with the tradition of Kantian constructivism – an astonishing gap in the literature, which has now been filled by this important and timely collection, which effectively shows how Hegel’s idealism provides the conceptual resources to respond to the conceptual dichotomies of Kantian constructivism." — Paolo Diego Bubbio, Associate Professor of Philosophy, Western Sydney University

"Hegel and contemporary practical Philosophy is an impressive collection of contributions by the best English-speaking scholars of Hegel. It shows how Hegel's practical philosophy clarifies the challenges at stake in contemporary discussions, for example between moral "constructivism" and "realism", which are enlightened by the introduction of the volume." — Jean-François Kervégan, Professor of Philosophy, University of Paris

"James Gledhill and Sebastian Stein have produced a book that is not only a collection of excellent essays on Hegel and practical philosophy, but an excellent collection with a unifying focus on Kantian constructivism. It contains essays by prominent and by up-and-coming Hegel scholars, all of which are informed by relevant debates in analytic philosophy. It will henceforth be indispensable reading for anyone working on Hegel's practical philosophy." — Gordon Finlayson, Director, Centre of Social and Political Thought, University of Sussex

1. Hegel’s "Actualist" Idealism and the Modality of Practical Reason

2. Choosing to do the Right Thing: Aristotle, Kant and Hegel on Practical Normativity and the Realism-constructivism Debate

3. Constraint and the Ethical Agent: Hegel Between Constructivism and Realism

6. Hegel’s Political Philosophy as Constructivism of the Real

7. Kant, Hegel and our Fate as Zoôn Politikon

8. Finding by Making: The Mediating Role of Social Constructions, Commitments, and Resonance in Hegelian Normative Realism

11. Hegel on a Form of Collective Irrationality

12. Saving Multiculturalism with Stakeholding: Hegel and the Challenges of Pluralism

14. Hegel and the Intercultural Conception of Universal Human Rights

James Gledhill is a lecturer in moral and political philosophy at the University of Leiden. His research interests are in political philosophy and critical theory, with a focus on the work of John Rawls and Jürgen Habermas and its relationship to a tradition of thought extending through Rousseau, Kant, and Hegel. He has published articles in Critical Review of International Social and Political Philosophy, Philosophy and Public Issues, Philosophy & Social Criticism, Journal of Social Philosophy, Raisons Politiques and Social Theory and Practice, and recently contributed the entry on Rawls for the Cambridge Habermas Lexicon.

Sebastian Stein is currently a postdoc at Heidelberg University sponsored by the German Research Foundation (DFG) for a project on philosophical method. He has published articles on post-Kantian idealism in the Hegel Bulletin, the Archiv für Rechts- und Sozialphilosophie and the Hegel Jahrbücher amongst others and has recently guest-edited a special volume of the Hegel Bulletin on Hegel and Aristotle. Together with Thom Brooks, Dr. Stein has edited and contributed to the collection Hegel’s Practical Philosophy: On the Normative Significance of Method and System (2017). His chapter ‘Hegel’ features in the Blackwell Guide to Nineteenth Century Philosophy and he has two collections on Hegel forthcoming with Routledge and one on Hegel’s Encyclopedia.