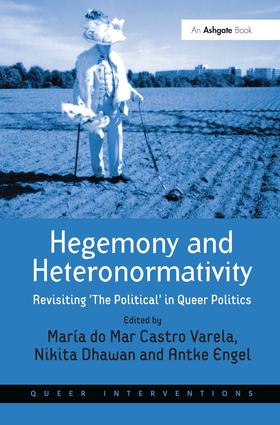 This book reflects on 'the political' in queer theory and politics by revisiting two of its key categories: hegemony and heteronormativity. It explores the specific insights offered by these categories and the ways in which they augment the analysis of power and domination from a queer perspective, whilst also examining the possibilities for political analysis and strategy-building provided by theories of hegemony and heteronormativity. Moreover, in addressing these issues the book strives to rethink the understanding of the term "queer", so as to avoid narrowing queer politics to a critique of normative heterosexuality and the rigid gender binary. By looking at the interplay between hegemony and heteronormativity, this ground-breaking volume presents new possibilities of reconceptualizing 'the political' from a queer perspective. Investigating the effects of queer politics not only on subjectivities and intimate personal relations, but also on institutions, socio-cultural processes and global politics, this book will be of interest to those working in the fields of critical theory, gender and sexuality, queer theory, postcolonial studies, and feminist political theory.

'This is an extraordinary collection that explores the relationship between queer theory and hegemony, charting a new direction for political thought. Here two important critical theories are brought into vital contact with one another. Hegemony establishes our consenting activities as effects of the very norms we seek to contest. Heteronormativity describes the constitutive paradox of being enabled by the very norms that constrain and produce us as intelligible subjects.Â Â This also affects the concept of heteronormativity. By thinking about heteronormativity in light of the theory of hegemony, we see an opportunity to recast queer theory at a critical distance from the neo-liberal celebration and normalization of difference. How do unmarked norms constrain the field of differences?Â  What we find in these pages is the notion that the counter-hegemonic must give political form to tensions that resolve neither into the normalization of difference nor the assertion of simple identity. By introducing incommensurability into our equations, what cannot be resolved becomes the condition of any future alliance. Considering critically the tension between consent and coercion, between queer theory and neo-liberalism, this volume shows how norms are incorporated and contested at the level of bodily practices and how power thrives in non-codifiable cultural conventions. In helping us to rethink power, new modes of embodied existence and future alliance, this book proves smart and urgent for our times.' Judith Butler, University of California, Berkeley, USA ’Overall, this is a diverse collection in ethos, tone and content which draws on international perspectives and material.’ Somatechnics

Founded by Noreen Giffney and Michael O'Rourke, Queer Interventions is an exciting, fresh and unique new series designed to publish innovative, experimental and theoretically-engaged work in the burgeoning field of queer studies. The aim of the series is to attract work which is highly theoretical; queer work which intersects with other theoretical schools (feminism, postcolonial theory, psychoanalysis, Marxism); work which is accessible but values difficulty; ethical and political projects; and most importantly work which is self-reflexive about methodological and geographical location. It is also keen to commission empirical work which is meta-theoretical in focus. The series is interdisciplinary in focus and publishes monographs and collections of essays by new and established scholars. It promotes and maintains high scholarly standards of research and is attentive to queer theory's shortcomings, silences, hegemonies and exclusions. It also encourages independence, creativity and experimentation: to make a queer theory that matters and recreate it as something important; a space where new and exciting things can happen.