Heidegger
The Man and the Thinker 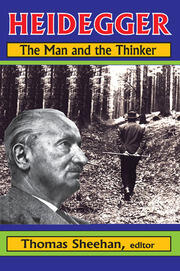 Heidegger: The Man and the Thinker

Many people consider Martin Heidegger the most important German philosopher of the twentieth century. He is indisputably controversial and influential. Athough much has been written about Heidegger, this may be the best single volume covering his life, career, and thought. For all its breadth and complexity, Heidegger's perspective is quite simple: he is concerned with the meaning of Being as disclosure.

Heidegger's life was almost as simple. He was a German professor, except for a brief but significant period in which he supported the Nazi regime. While that departure from philosophy continues to haunt his name and work, one must question whether his thought from 1912 to 1976 should be measured by the yardstick of his politics from May, 1933, through February, 1934. Th is anthology addresses his complex but simple thought and his simple but complex life.

In a real sense, Sheehan claims, there is no content to Heidegger's topic and legacy, only a method. But method must not be taken to mean a technique or procedure for philosophical thinking. Rather, the topic of Heidegger's thought and his pursuit of that topic, the "what" and the "how," are one and the same thing.

Heidegger writes, "Alles ist Weg," "Everything is way," and man's Being is to be on-the-way in essential movement. Heidegger, argues in our essence we humans are the topic and the point is not to be led there so much as to come to know what we already know and to become what we already are. This brilliant collection confirms this truism, and is an excellent introduction to the work of this seminal thinker.

Preface -Thomas Sheehan
Introduction: Heidegger, the Project and the Fulfillment -Thomas Sheehan
Part I. Glimpses of the Philosopher's Life
Heidegger's Early Years: Fragments for a Philosophical Biography -Thomas Sheehan
A Recollection (1957) -Martin Heidegger
Letter to Rudolf Otto (1919) -Edmund Husserl
Why Do I Stay in the Provinces? (1934) -Martin Heidegger
Heidegger and the Nazis -Karl A. Moehling
"Only a God Can Save Us": The Spiegel Interview (1966) -Martin Heidegger
The Pathway (1947-1948) -Martin Heidegger
Seeking and Finding: The Speech at Heidegger's Burial -Bernhard Welte
Part II. Being, Dasein, and Subjectivity
Heidegger's Way Through Phenomenology to the Thinking of Being -William J. Richardson, S.J.
Toward the Topology of Dasein -Theodore Kisiel
Into the Clearing -John Sallis
Heidegger's Model of Subjectivity: A Polanyian Critique -Robert E. Innis
Part III. In Dialogue with Max Scheler
Reality and Resistance: On Being and Time, Section 43 -Max Scheler
Heidegger on Transcendence and Intentionality: His Critique of Scheler -Parvis Emad
In Memory of Max Scheler (1928) -Martin Heidegger
Part IV. Overcoming Metaphysics
Heidegger and Metaphysics -Walter Biemel
Metaphysics and the Topology of Being in Heidegger -Otto Po;ggeler
Finitude and the Absolute: Remarks on Hegel and Heidegger -Jacques Taminiaux
The Poverty of Thought: A Refl ection on Heidegger and Eckhart -John D. Caputo
Part V. Technology, Politics, and Art
Beyond "Humanism": Heidegger's Understanding of Technology -Michael E. Zimmerman
Heidegger and Marx: A Framework for Dialogue -David Schweickart
Principles Precarious: On the Origin of the Political in Heidegger -Reiner Schurmann
Heidegger's Philosophy of Art -Sandra Lee Bartky
Part VI. Bibliographies
Heidegger: Translations in English, 1949-1977 -H. Miles Groth
Bibliography: Heidegger Translations in English
Heidegger: Secondary Literature in English, 1929-1977 -H. Miles Groth