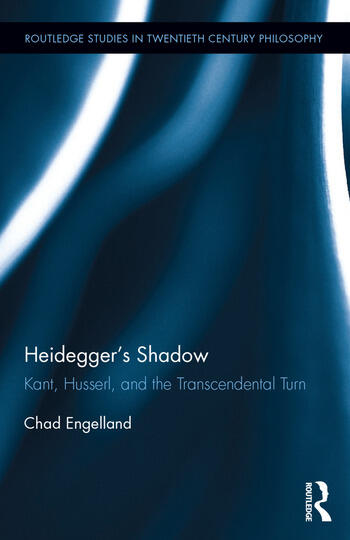 Part I: The Shadow is Cast

Part II: The Attempt to Jump Over the Shadow

Conclusion: The Finitude of Philosophy

Chad Engelland is Assistant Professor of Philosophy at the University Dallas in Irving, Texas. He is the author of Ostension: Word Learning and the Embodied Mind and The Way of Philosophy: An Introduction.

"This is a subtle and engaging work, underwritten by a deep knowledge of Heidegger's texts: it does much to advance our understanding of Heidegger's complex, conflicted, relationship with the transcendental and it deserves the closest of attention." —Notre Dame Philosophical Reviews

"Written with a sure-handed command of Heidegger’s corpus and the historical context of his thinking, Heidegger’s Shadow makes a powerful case for its persisting transcendental character.  In the process Engelland’s remarkable study manages to offer not only a way out of a current impasse among reigning interpretations of Heidegger’s mature thought but also a compelling account of its singular strengths and weaknesses. Tightly and lucidly argued, this book is scholarship at its finest, a major contribution to understanding the promise of Heidegger’s later writings." —Daniel O. Dahlstrom, Boston University, USA, author of Heidegger’s Concept of Truth

"Chad Engelland’s provocative and carefully researched book is the most sustained treatment to date of the role that transcendental philosophy plays throughout Heidegger’s path of thinking. Tracing the early Heidegger’s fascination with transcendental phenomenology as the key to his enduring question—above all, in close readings of Husserl and Kant—Engelland goes on to show how Heidegger’s subsequent attempt to ‘jump over his shadow’ and escape transcendentalism was both necessary and impossible. In the tension between these two modalities, Engelland finds the basis for a positive appropriation of Heidegger’s project that does not lose itself in false dichotomies between ‘early’ and ‘late’ periods." —Steven Crowell, Rice University, USA, author of Normativity and Phenomenology in Husserl and Heidegger and coeditor of Transcendental Heidegger

"With Heidegger’s Shadow Chad Engelland has given us the best book in any language on the transcendental in Heidegger. Deftly argued and clearly written, this path-breaking work tracks that crucial issue from Being and Time through the two Kant books and the complex potpourri that is Contributions to Philosophy. One needn’t agree with everything in this text to realize that it puts us in the presence of a first-rate philosophical mind." —Thomas Sheehan, Stanford University, USA, author of Making Sense of Heidegger: A Paradigm Shift

"In this careful study, Chad Engelland makes the case that the transcendental questions pursued in Being and Time were not simply abandoned in Heidegger’s later work, but were transformed into an inquiry into fundamental dispositions—ways in which we find ourselves thrust into an ‘affective transcendence’ appropriate to our historical juncture. Engelland tells an insightful story about the continuity of Heidegger’s thought while shedding light on many of its essential impulses." —Richard Polt, Xavier University, USA, author of The Emergency of Being: On Heidegger’s ‘Contributions to Philosophy’

"Engelland’s study is one of the most comprehensive treatments of Heidegger’s interpretation of Kant that is available, and is a must-read for scholars interested in this subject and in the question of Heidegger’s relationship to transcendental philosophy." —Leslie MacAvoy, East Tennessee State University, USA