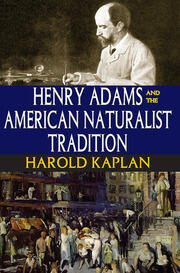 The naturalist tradition in American fiction was a product of the tremendous changes wrought in late nineteenth-century America by the development of science and technology and by the intellectual upheavals associated with the ideas of Darwin, Marx, Nietzsche, and Freud. This book is an account of naturalism, perhaps the strongest and most influential intellectual tradition or, as Harold Kaplan would argue, mythology to affect modern American literature and culture.

Kaplan approaches the naturalist writers through a study of Henry Adams. He sees in Adams the paradigmatic intelligence of his time a prophetic mind, though not a seminal one and a man absorbed with the twin notions of power and order. Adams's major work illustrates the joining of a literary imagination and moral temperament with an almost obsessive response to the science, economic life, and politics of his world. Adams's work exemplifies what Kaplan calls the myth of metapolitics a view of human struggle and fate profoundly dominated by naturalist concepts of power.

Kaplan then turns to the fascination that power in its various manifestations material, moral, social, political held for writers such as Dreiser, Norris, Crane, and others. Their dramatic plots, characters, and allegorical images are examined in detail. In wider reference, this book should concern those who are interested in problems of modern ethics and politics in the effort to harmonize concepts of value with images of power and natural order.

Preface
1. The Myth of Power
2. The Naturalist Ethos
3. Henry Adams: The Metapolitics of Power and Order
4. The Dehumanization of Politics
5. Naturalist Fiction and Political Allegory
6. Vitalism and Redemptive Violence
7. "Godlike Reality": A Testing and Truthful Violence
Notes
Index