Hex: The Full Story is for anyone - hobbyist, professional, student, teacher - who enjoys board games, game theory, discrete math, computing, or history. hex was discovered twice, in 1942 by Piet Hein and again in 1949 by John F. nash. How did this happen? Who created the puzzle for Hein's Danish newspaper column? How are Martin Gardner, David Gale, Claude Shannon, and Claude Berge involved? What is the secret to playing Hex well? The answers are inside...

The quest for strategies

The rise of the bots

Ryan B. Hayward is Professor of Computer Science at the University of Alberta, Canada.

Bjarne Toft is Professor Emeritus at the Univeristy of Southern Denmark.

Click here to see a review of the book, along with some Hex puzzles set by Oliver Roeder of FiveThirtyEight.

“The full story of the game of Hex as told in this ambitious book is in fact two rather distinct stories. On the one hand, there is a deeply human story of how the game of Hex came about and how it has developed over the years; this is a fascinating historical tale full of interesting and often brilliant characters. On the other hand, there is also what is essentially a mathematical story of the game itself; what mathematical theory is involved, what sort of strategies are needed to play the game well, how Hex is similar to or different from games such as chess and Go, and how well computers do playing against expert human Hex players.

[. . . ] The story of the birth and early success of Hex has been meticulously researched here and is extremely well told. In particular, the book contains many wonderful old photographs. [. . .] At this point humans still seem to have an advantage over computers on 13 × 13 boards and larger, but as the authors say, ‘The story of Hex continues’”
—MathSciNet Mathematical Reviews, American Mathematical Society

". . . this is not a mathematics textbook, and people who are not terribly interested in mathematical proofs and reasoning will still find much of interest here. In addition to discussing some of the mathematics behind the game, for example, the book also addresses at great length the history of Hex [. . .]. In addition to tracing the history of Hex, the authors also include lots of actual puzzles, with solutions, and discuss at length aspects of Hex strategy. Games that are related to Hex, such as Bridg-It and Rex (also known as "reverse Hex"), are also discussed. [. . .] Because of its mathematical content, instructors of courses in subjects like game theory or discrete mathematics might want to flip through it as a potential source of lecture material. People interested in the history of mathematics might find some of the biographical and historical detail here interesting. And of course anybody who enjoys the game of Hex will find much of here interest as well. It’s a fun book."
—Mark Hunacek, MAA Reviews 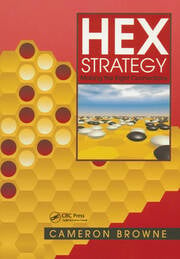 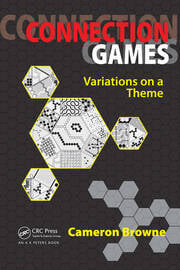