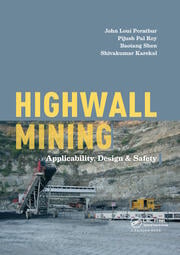 The book will equip readers in understanding the complex, multiple seam scenarios for highwall mining, and its design for maximum coal recovery from any given site with better economics, which will aid the mining companies in extracting locked-up coal following the safety norms to avoid hazards and minimise instability issues. A large number of case studies is included to illustrate the application of numerical modelling for prior estimation and viability of highwall mining operations under varying geomining conditions.

The book will be of interest to professionals and academics in the field of mining engineering specifically, but will also interest civil, geomechanical and geological engineers as well as rock mechanics professionals.

Dr. John Loui Porathur is a Principal Scientist at Regional Center for Rock Excavation and Rock Mechanics at Nagpur, India under CSIR-Central Institute of Mining & Fuel Research, Dhanbad, India. He obtained Bachelor of Technology (Hons.) and Ph.D. in Mining Engineering from Indian Institute of Technology, Kharagpur, India. Since 1997 he has been working as a scientist in CSIR-Central Institute of Mining and Fuel Research (CSIR-CIMFR). His major areas of research include rock mechanics, mining methods, numerical modelling, subsidence engineering, etc. He has published and presented over 65 research papers in various International and National scientific journals and conferences.

Dr. Pijush Pal Roy is the Senior-most Scientist and Head of Research Group of Rock Excavation Engineering Division of CSIR-Central Institute of Mining & Fuel Research, Dhanbad and Former Acting Director of CSIR-Central Mechanical Engineering Research Institute, Durgapur, India. Before joining to CSIR-CIMFR, he was in the teaching profession for nearly 5 years and since joining CSIR-CIMFR, obtained over 31 years of R&D experience. He is the author of 3 books in rock blasting (Oxford IBH Publishing Co. and CRC Press), 2 guidelines and 118 National and International Publications. His research areas include rock blasting technology, highwall mining, mathematical modelling and environmental impacts of blasting. He has worked in more than 320 mines and quarries, around 15 hydroelectric projects as part of sponsored and consultancy projects and many S&T Projects sponsored by the Government of India.

Dr. Baotang Shen is a Senior Principal Research Scientist and Group Leader for Mine Safety and Environment at CSIRO Energy. Dr. Shen obtained his first degree in mining engineering in 1985 in China. He obtained his Ph.D. in rock mechanics in Sweden in 1993, and then worked with Norwegian Ge